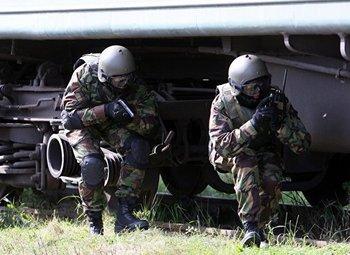 IIKSS - Russia's Federal Security Service (FSB) said Saturday that it has detained a group of terrorists on suspicion of plotting attacks in the capital city of Moscow and Russia's second largest city of St. Petersburg.
With the help of counterparts from Tajikistan and Kyrgyzstan, 10 people, some from Central Asia, who were planning high-profile attacks in Moscow and St. Petersburg, were detained in Saturday's special operations, the FSB said in a statement.
Improvised explosive devices stuffed with shrapnel, firearms, as well as remote control and communication devices have been found from them, it added.
The suspects have admitted their link to the Islamic State terrorist group, according to the FSB.