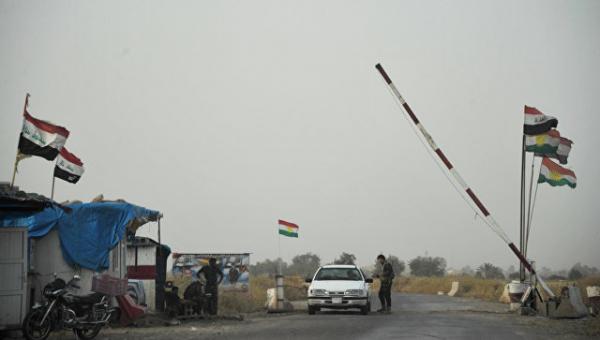 IIKSS- Dust is seen after an Iraqi soldier fired from a tank during fighting with Islamic State fighters, in the Shahrazad district of eastern Mosul, Iraq, November 6, 2016. © Zohra Bensemra / Reuters
AddThis Sharing Buttons
Share to FacebookShare to TwitterShare to RedditShare to StumbleUponShare to Google+Share to Tumblr
Peshmerga forces battling Islamic State in Iraq have lost many lives, the Iraqi Kurds’ top diplomat, Falah Mustafa Bakir, told the media in Moscow. The Kurds have requested humanitarian aid from Russia to assist refugees and support for Peshmerga troops.
“We’ve made a request to support the Peshmerga forces, who have been fighting against terrorism, namely Islamic State [IS, formerly ISIS/ISIL], for more than two years. Many fighters have lost their lives during the fight,” Falah Mustafa Bakir, head of the foreign department of Kurdistan’s Regional Government (KRG), told Russia’s Izvestia daily on Monday.
“We have requested humanitarian aid to support the refugees who came to Iraqi Kurdistan from other parts of the country, as well as Syria,” he added.
Bakir arrived in Moscow to discuss a range of problems in Iraq, particularly the challenge of combating terrorism in Iraq and Syria. Previous Tuesday, he met Russian Deputy Foreign Minister and Special Presidential Representative for the Middle East and North Africa Mikhail Bogdanov, Russia's Ministry of Foreign Affairs said in a press release.
Asked whether Kurdistan had turned to Russia for military help, in light of the current operation to eliminate an IS stronghold in Mosul, Bakir told Izvestia daily:
“Yes, we have asked for this kind of support, because as things stand now, the issue of counter-terrorism is crucial. The struggle is for the Islamic State stronghold in northern Iraq [Mosul]. In this regard, we believe that the international community, and above all our allies, one of which is Russia, should provide us with comprehensive support.”
Foreign Minister Sergey Lavrov has earlier expressed Russia’s concern over the looming exodus of refugees from Mosul, Iraq’s second-largest city, with an estimated population of 1.3 million. According to the International Committee of the Red Cross (ICRC), as fighting intensifies, a million Mosul residents could be forced to flee their homes.
Lavrov said in mid-October that neither Iraq nor its neighbors currently have the capacity to accommodate such a large number of refugees and that this should have been a factor in the planning of the Mosul operation.
On Sunday, Foreign Ministry spokesperson Maria Zakharova expressed concern that current events in Mosul start resembling “medieval slaughter, in which the civilian population is primarily affected.”
“It turned out that no fundamental plan to rescue the civilians has been developed. There’s no such thing as humanitarian corridors. There is no consistency in the evacuation of the people,” Zakharova wrote on her Facebook page. “One thing is clear, the coalition treats the Iraqi civilians in Mosul a lot worse than the militants in Aleppo.”
According to latest reports, on Sunday the Iraqi Army entered residential areas in the north of Mosul for the first time. The offensive has slowed down over the past days as the Iraqi Army and militia reach densely-populated areas of the city.
Over 25,000 Iraqi troops, consisting of Kurdish as well as Sunni and Shiite militias, are taking part in the campaign to retake the city from IS, which has maintained a grip on it since June of 2014. Local forces have been receiving constant support from the US-led coalition, which has provided advice and training to Iraqi army servicemen.
Iraqi security forces have killed up to 900 IS fighters since launching their offensive to recapture Mosul, backed by US-led airstrikes, General Joseph Votel, head of the US military’s Central Command, told AFP late last month. The Iraqi government said 57 of its soldiers had been killed and about 250 wounded, while the Kurdish Peshmerga fighters had suffered about 20 to 30 fatalities.
The Kurdistan Regional Government is the official ruling body of the predominantly Kurdish autonomous region of northern Iraq, referred to as Iraqi Kurdistan or Southern Kurdistan.
In July 2014, President Massoud Barzani (Prime Minister Mechervan Barzani’s uncle), who has been heading Kurdistan’s regional government since 2005, announced that Iraq’s Kurds were to hold an independence referendum. But the security situation forced these plans to be postponed, as IS was gaining ground in the region.
In February this year, however, President Barzani once again voiced the desire to hold a referendum on a Kurdish state in northern Iraq, raising tension with Baghdad, which is against secession.
Despite the goodwill Kurdish forces have gained in the international community since they joined the battle against IS, it is unlikely their independence claims will see much support, as major powers in the region have historically opposed Kurdish aspirations for independence, especially neighboring states with large Kurdish minorities of their own.