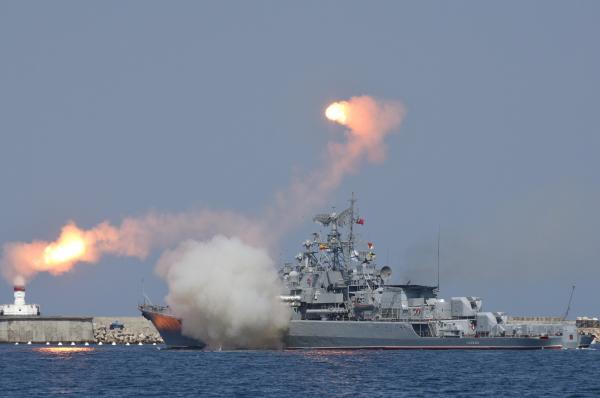 IIKSS- Russian President Vladimir Putin delivers a speech during celebrations for Navy Day as it rains in Baltiysk Thomson Reuters
In the November issue of the US Naval Institute's Proceedings magazine, Commander Daniel Thomassen of the Royal Norwegian Navy argued that Russia's dream to build a blue water, or global, navy remains a "pipe dream."
Russia's navy has made headlines recently with high profile cruise missile strikes on Syria, and the deployment of the core of its norther fleet, including the Admiral Kuznetsov carrier, to the Mediterranean.
According to Thomassen, Russia's navy has considerable regional defense and anti-access/area-denial (A2AD) capabilities, but no reasonable path towards the type of naval power the US wields.
"Russia is capable of being a regional naval power in local theaters of choice. But large-scale efforts to develop an expensive expeditionary navy with aircraft carriers and amphibious warfare ships only would diminish Russia’s geographically overstretched homeland defense forces," writes Thomassen.
Thomassen goes on to point out that strong navies have strong allies and healthy fleets. While Russia has been improving its fleet with some particularly good submarines, it lacks a big fleet that can build partnerships with allies around the world through bilateral exercises.
The US, on the other hand, regularly engages with allies to strengthen joint operations. The US can do this in part because it has enough ships around the world.
But the state of Russia's navy now is only part of the picture. Russia has never been a major naval power, Thomassen points out. At times Moscow has established itself as a coastal naval power, but it never had a truly global reach on par with historic powers like England or Spain.
Russian warships are armed to the teeth with potent weapons, but don't expect them to travel the globe without issue. Pavel Rebrov/Reuters
Furthermore, Russia's future as a naval power isn't that bright. Russia has been in a recession for 3 solid years. International sanctions tied to its illegal annexation of Crimea have greatly reduced Moscow's ability to bulk up its fleet.
But that doesn't seem to matter to Russian leadership, which has set "highly ambitious governmental guidelines for developing and using sea power over the next decades."
In addition to its submarine fleet, Russia wants new frigates, cruisers, and even carriers. These prospects seem especially dubious because Russia's Kuznetsov isn't really a strike carrier like the US's Nimitz-class carriers.
The Kuznetsov has never conducted a combat mission. Mechanical troubles plague the Kuznetsov, so much so that it often sails with a tugboat. Also, the Kuznetsov just isn't built for the kind of mission it will undertake off Syria's coast.
Planes practice taking off from Russia's only aircraft carrier on it's way to support Assad in Aleppo. Norwegian Navy
"Since a major confrontation between NATO and Warsaw Pact would most likely take place in Europe, during the later Cold War Soviet planners focused on protecting the heavily defended 'bastions' shielding their ballistic missile submarines and not seaborne power projection.
In fact, Russia itself doesn't have the makings of a global sea power. While it has both Pacific and Atlantic coasts, like the US, the population of Russia's far east is about as sparse as you'll find anywhere in the world.
But one powerful reason dictates why Russia's leadership still marches towards this seemingly unattainable goal — prestige. Being seen as a credible alternative to Western naval power seems important to Russian leadership, and operating a carrier is one way to do that. Additionally, Moscow will spin its carrier deployment as propaganda, or a showcase for its military wares.
So while Russia has capable, credible naval forces to defend its homeland and near interests, it will likely never project power abroad like the US and other naval powers of the past have.

No Sabotage! Over 20 Warships of Russia’s Caspian Flotilla Hold Drills

No Sabotage! Over 20 Warships of Russia’s Caspian Flotilla Hold Drills More than 20 warships of the Russian Caspian ...