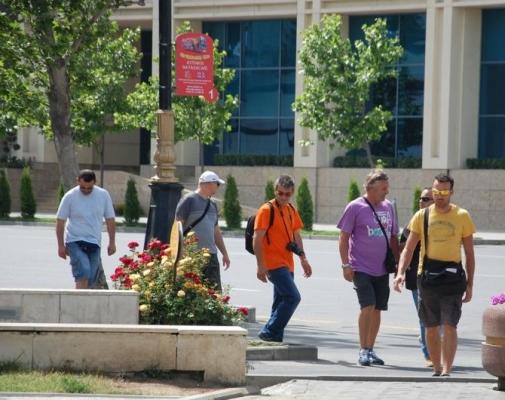 IIKSS- Russia and Azerbaijan, the two friends and neighbors, are looking for ways to expand the interaction in the tourism sphere.
The countries plan to start with expansion of the direct flights, which today is carried out in six directions between the two countries.
Head of the Federal Tourism Agency of International Cooperation Valery Korovin said that the level of tourism logistics between the two countries is below its real possibilities.

“Currently, flights  from Baku are performed to only six cities of Russia, despite the fact that there are 14 ‘millionaire’ cities in Russia, and each of them is a potential base for tourists,” Korovin said, summarizing the 7th Azerbaijani-Russian inter-regional forum held in Baku on November 1.
He added that detailed work will be implemented in this direction together with the air carriers of Russia and Azerbaijan.
“Another problem is insufficiency of railway communication and the lack of sea links between our countries,” Korovin noted. “But the problem of the Caspian Sea is the complete absence of cruise vessels. We are aware of this problem and work on its solution. The issue of railway and air transport can be solved in the nearest future.”
This summer several Russian air carriers received permission to perform flights to Baku from such Russian cities as Nizhny Novgorod, Samara, Kaluga and Rostov-na-Donu.
Two other airlines received permission in fall to operate flights from Zhukovsky to the Azerbaijani city of Ganja several times a week. Moreover, Russian company Ural Airlines opened a new flight Gabala-Moscow-Gabala from July 31.
Azerbaijan’s tourism industry is growing rapidly year after year, and today Russian tourists make up more than 32 percent of the total number of tourists visiting the country.
However, Korovin believes that the number of tourists can be more if awareness of both Russian and Azerbaijani citizens about tourism opportunities of the neighboring country increases.
“We are very glad that Azerbaijan has opened an information center in Russia, and we hope it will bring positive results,” he said.
During the round table held within the Forum, the deputy head of Tourism Department of Azerbaijan’s Culture and Tourism Ministry, Rauf  Pashayev, said that the ministry plans to hold a campaign on Russian television for the promotion of winter tourism in Azerbaijan
Pashayev noted that the ministry regularly organizes advertising on Russian television.
“We broadcast a number of ads on Russian television in 2013, and we plan to promote winter tourism in Azerbaijan this year also,” he said.
Tourism plays an important role in the economy of Azerbaijan, Pashayev said. "Last year the share of tourism in the country's GDP exceeded three percent, which is a good indicator for oil country,” he said.
He further noted that the most promising areas of cooperation with Russia in the field of tourism are wellness and business tourism.

"Even in Soviet period, Naftalan resort, known for its healing properties, was very popular in Russia. And today, after restoration of Naftalan, citizens of Russia, Kazakhstan and the whole CIS are the main visitors of the resort. Another promising direction is cooperation in business-tourism sphere," he said.
Russians choose Azerbaijan as their travel destination for many reasons. First of all the Land of Fire does not require visa for Russian tourists to enjoy the country.
Azerbaijan is also a perfect destination for Russian tourists, because of its people’s very friendly attitude towards Russia. Here Russian-speaking tourists have no problem with communication, as Azerbaijanis speak Russian well enough to help with any difficulties.
Resource: azernews

By Huseyn Hasanov – Trend: A report on the construction pace of the Turkmenistan-Afghanistan-Pakistan-India (TAPI) gas pipeline was delivered at a ...

Replacement of pipes at Kazak Kashagan field on schedule

Energy: what was once a largely single-resource/two-state controlled industry has given way to other resources of significance. In turn, this ...

Azerbaijan, Turkey to cooperate in field of seed production

The State Seed Fund under the Agriculture Minister of Azerbaijan and the General Directorate of Agricultural Enterprises (TIGEM) of Turkey signed a ...