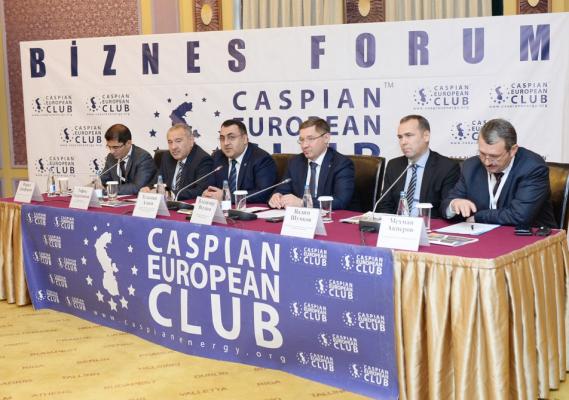 IIKSS- Baku has today hosted Caspian European Club’s (Caspian Business Club) business forum held with participation of the governor of the Tyumen Oblast of the Russian Federation Vladimir Yakushev.
Prospects of cooperation between the companies of Azerbaijan and Tyumen Oblast in different areas of economy were discussed at the business forum attended by about 30 companies of the Tyumen Oblast and member companies of the Caspian European Club (Caspian Business Club).
Addressing the business-forum, governor of the Tyumen Oblast Vladimir Yakushev spoke about the high-level cooperation between Azerbaijan and the Russian Federation, establishment of partner relations based on the constructive dialogue. He invited Azerbaijani companies to join the dialogue and solve problems facing entrepreneurs of the two countries.
Telling forum participants about reforms that have been recently held in the region, Yakushev said that Tyumen Oblast is interested in broadening of cooperation with Azerbaijan both in oil-gas industry and non-oil sector.
Providing detailed information about the opportunities for businessmen in Tyumen Oblast, the Governor expressed readiness to keep maintaining the cooperation with the Caspian European Club (Caspian Business Club), bringing together hundreds of foreign and local companies together, in order to raise the level of cooperation as well as develop partner relations between business-structures of the two countries.
The Governor emphasized that prices for energy resources used to be high till 2014 while now there are other requirements and needs observed in the market. “Now we have to work in order to develop the economy in new conditions. Our economies are alike and this is the reason why we visit Baku with a big delegation. Today we are presenting our investment potential,” he continued.
“We can hold a fruitful cooperation in oil-gas and oil service sectors. Business representatives must reach contact points and we should provide conditions for them,” the Governor noted.
Deputy Governor of the Tyumen Oblast Vadim Shumkov provided information about the potential of the oblast. According to him, since 2006 the growth of the industrial production index totaled over 10%. “Investments made into the oblast increased by 4 times in 10 years. Gross Regional Product totaled over 898 bln RUB in 2015. GRP increased twice as much within 10 years. Tyumen Oblast has become one of top 5 leading regions in the national rating of RF 2016”, he said, presenting investment projects implemented in the oblast.
Proposals of companies were listened during the forum, and problems faced by businessmen and the ways to address them were discussed. The representatives of the Tyumen Oblast also responded to the questions of companies participating in the business forum.
Joint projects in the areas of oil and gas engineering, healthcare, education and tourism, oil and gas services and oil refining were stated as the promising areas of cooperation. The forum attendees discussed the possibilities of exchanging experience in the construction industry and expansion of mutual trade.
Speaking at the business forum, SOCAR Vice-President for Strategic Development Tofig Gahramanov briefed about the activities and structure of the company. He provided information on the overall development of SOCAR and expressed willingness to cooperate with the business community of the Tyumen Oblast.
General Manager of SOCAR Russia and SOCAR Polymer Farid Jafarov presented the detailed information about the prospects of cooperation in the oil and gas sector between Azerbaijan and Russia.
Addressing the business forum, First Vice Chairman and Chief Executive Officer of the Caspian European Club (Caspian Business Club) Telman Aliyev thanked the Governor of the Tyumen Oblast Vladimir Yakushev for an active cooperation and support of businessmen. Aliyev presented information about the 4th International Caspian Energy Forum-2016 (www.caspianenergyforum.com) to be hosted in Baku on December 7, 2016. He invited business representatives to take an active part in the forum which is going to be attended by heads of government agencies, ministries, committees and departments of Azerbaijan, Caspian-Black Sea and Baltic region countries, representatives of diplomatic and international missions accredited in the Republic of Azerbaijan, as well as heads of large international companies. Over 200 delegates from 15 countries of the world have so far been registered to attend the 4th International Caspian Energy Forum-2016.
Telman Aliyev noted that Caspian European Club (Caspian Business Club) was established in June 2002 under support of large oil-gas companies operating in the Caspian and Black Sea region. His Excellency President of the Republic of Azerbaijan Ilham Aliyev is the Chairman of the Caspian European Club (Caspian Business Club). According to Telman Aliyev, the Caspian European Club (Caspian Business Club) has promoted attraction of oil sector revenues into development of the non-oil sector since its establishment. Caspian European Club, which brings together over 5,000 member companies and organisations, is operating in 50 countries around the world, carrying out an active work to maintain the dialogue between government agencies and the private sector.
In the course of the business forum Vladimir Yakushev was presented an honorary membership certificate of the Caspian European Club (Caspian Business Club). The business forum was attended by heads of companies and ambassadors, representatives of diplomatic agencies and international organizations.