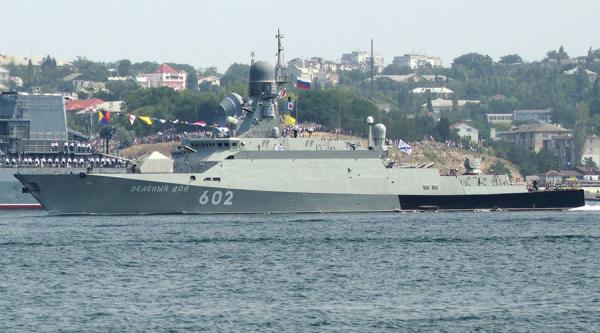 Two Russian vessels will join up with Russia’s permanent naval fleet in the Mediterranean Sea, where they will assist in the military operation against Islamic State (IS, formerly ISIS/ISIL) in Syria.

“It is planned that the Serpukhov and the Zeleny Dol will go to the Mediterranean as part of a planned rotation that will join up with the permanent naval task force,” Russian Navy representative Nikolay Voskresensky told journalists.

The two guided missile fast attack craft left from the port of Sevastopol on October 4 and are currently sailing through the Black Sea in order to join up with the Russian fleet.

The Serpukhov and the Zeleny Dol already participated in Russia’s Syria operation in the Mediterranean in the middle of August, when they fired three Kalibr cruise missiles at Al-Nusra Front terrorists before returning to Crimea in September.

The US Office of Naval Intelligence (ONI) is wary of the Kalibr missile, which “is profoundly changing its ability to deter, threaten or destroy adversary targets,” the report published in December said.

The weapon saw its first combat use in October 2015, when a salvo of missiles launched from four small Russian warships in the Caspian Sea hit targets in Syria. In December, the Russian Navy used the same long-range, low-flying cruise missiles to strike more terrorist targets in Syria from a submarine in the Mediterranean Sea.

In September, the Russian Navy announced that the Admiral Kuznetsov aircraft carrier would be joining up with the country’s naval group operating in the eastern Mediterranean as well.

“Currently, the Russian naval group in the eastern Mediterranean includes at least six warships and three or four support vessels from all fleets. To increase the combat capabilities of the group, [we] plan to include the cruiser Admiral Kuznetsov into its ranks,” Russian Defense Minister Sergey Shoigu said at the time.

The aircraft carrier is expected to reach its intended destination by the middle of October and will spend between four and five months in the region.