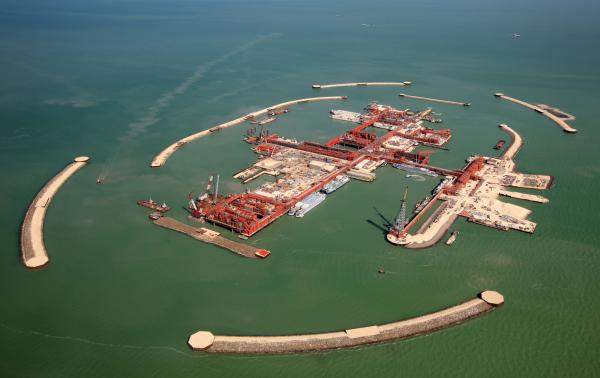 Energy-rich Kazakhstan may start oil export from its large Kashagan field through Azerbaijan in 2017.  Kazakh Energy Minister Kanat Bozumbayev said that the country does not exclude the possibility of transporting oil through Azerbaijan, should the market conditions change next year.

The minister made the remark while addressing the 13th meeting of the Kazakh-Azerbaijani intergovernmental commission on economic cooperation on September 22.

“Kashagan oil may be transported by means of Azerbaijan’s railways or pumped through pipelines of the country,” he said adding that the volume of production is expected to increase in the short run.

Kazakh minister said that the field is planned to be officially launched in late October.

“We will launch oil extraction soon and announce the volume of commercial output in November. We are planning to produce first oil on September 24.”

Kashagan is a large oil and gas field in Kazakhstan, located in the north of the Caspian Sea. The preliminary volume of production will stand at 75,000 barrels per day.

The geological reserves of Kashagan are estimated at 4.8 billion tons of oil. The total oil reserves amount to 38 billion barrels; some 10 billion out of them are recoverable reserves. There are large natural gas reserves at the Kashagan field - over one trillion cubic meters.

The production at the Kashagan field started in September 2013, but in October, it was suspended after a gas leak in one of the main pipelines.

Meanwhile, Azerbaijan may also resume export of liquefied hydrocarbon gas through Batumi oil terminal, which belongs to the national oil transporter of Kazakhstan KazTransOil. The transportation of Azerbaijan’s liquefied hydrocarbon gas trough Batumi terminal has been gradually decreasing since 2010 (from 156,000 tons in 2010 down to 23,000 in 2014), while it was totally suspended in 2015.

Kazakhstan's economy depends heavily on the oil sector. It accounts for an estimated 20 percent of GDP, 50 percent of fiscal revenues, and 60 percent of exports

The country's proven oil reserves as of early 2016 stood at 30 billion barrels, according to BP Statistical Review of World Energy. Largest oil fields of the country alongside with the Kashagan are Tengiz and Karachaganak.