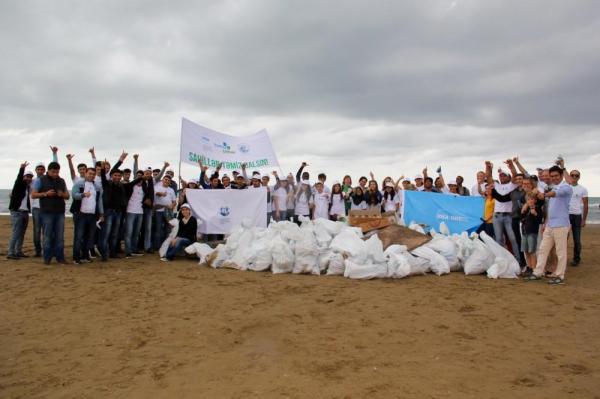 Conducted as part of the UN’s program - The Global Partnership on Marine Litter (GPML) -  the event gathered over 100 volunteers to raise public awareness in preventing pollution along coastal areas as well as maintaining the removal of litter. Failure to clean up waste on beaches, apart from causing sanitation problems, results in significant damage to marine environment.

Equipped with all the necessary sanitary tools, the participants cleaned up the polluted plot of the shoreline. Afterwards, the waste was delivered to the Balakhani Solid Waste Sorting Plant.

In regards with the cleanup week, the event caused a significant public interest and brought together participants of all different ages. It has also been remarkable to see the representatives of the diplomatic corps (Ambassador to the Republic of Azerbaijan Robert Cekuta and the Embassy team) join the IDEA cleanup campaign for the first time.

As part of its marine environment protection efforts, IDEA attaches special attention to the water quality improvement both in the Caspian Sea and in internal waters. Traditionally, IDEA organizes series of similar beach and river cleanups every year.

Regardless of the season, IDEA calls upon everyone to protect the environment in coastal areas, and make the contribution to the fight against environmental problems! Remember, plastic, metal, glass bottles, and other waste that is thrown into sea does not decompose, and as a result harms the marine life.

IDEA Campaign invites all organizations and representatives who are accredited for diplomatic mission in our country to join its environmental initiatives.

UK flowmeter specialist Litre Meter has supplied a large range of its popular VFF flowmeters for the Shah Deniz gas ...

Cuba to seek oil imports from Russia, Iran   Cuba is looking to Russia and Iran to make up for dwindling ...

The current situation is by no means a good time for agreement on the Caspian Sea regime/ do ...