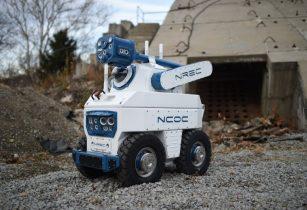 Sensabot, the first resident mobile robot certified to work in difficult and hostile industrial facilities, has been launched by Shell

Shell will send semiautonomous Rover vehicles to a desert island in Kazakhstan’s Kashagan development, which lies in the Caspian Sea, a site known for high levels of a poisonous gas called hydrogen sulfide.

The Sensabot is equipped with sensors, cameras and wireless communications that enable the company to remotely control the infrastructure with an operator who handles the robot from a safe place.

According to the company, Sensabot is the culmination of seven years of work with leading robotics experts from across the world, including Carnegie Mellon University in the USA, the UK’s Soil Machine Dynamics (SMD) and Improvia in the Netherlands.

“Sensabot enables colleagues to do their jobs at a safe distance, while also lowering the costs of day-to-day operations,” said Alisa Choong, executive VP responsible for digital technologies at Shell. “Sensabot represents the strong ambition of Shell to lead in safety-enhancing technology, especially in exceptional environmental and operational situations,” Choong added.

The robot will work in remote or unmanned oil and gas facilities and is designed to work for six months without requiring maintenance. Operators will be able to use Sensabot as their eyes and ears on the ground to check equipment and respond to alerts faster whilst gathering accurate real time data.

To enable a smooth integration of Sensabot into operating assets, the robot comes with an innovative rapid-deployment container and powerful private 4G-LTE system that could provide connectivity to up to 5,000 devices including industrial smartphones, tablets, people and material-tracking and condition monitoring equipment. In industrial locations, the 4G LTE is cheaper and provides more reliable coverage than other types of industrial wireless networks.

While the Sensabot platform is currently equipped for surveillance of oil and gas facilities, different manipulator arms enable it to be adapted for use by emergency services, or for maintenance purposes. Shell is seeking commercial partners to adapt Sensabot for other specialist functionalities.

Adam Serblowski, robotic engineer Shell programme, sees the robot as ‘an extension of the human worker’ rather than a substitute.

According to a report, the global inspection robots market in the oil and gas industry to grow at a CAGR of 20.46 per cent over the period 2014-2019.

Inspection robots play an important part in the oil and gas industry by taking the invaluable role of inspection, monitoring, and surveillance of complex structures in oil and gas, and, thereby, averting any disasters that may occur otherwise. The use of these robots help in reducing human intervention, increase operational efficiency, reduces cost and improves safety.

The report added that the increase in offshore drilling activity is one of the major drivers in the global inspection robots market in the oil and gas industry. There is increased interest in extracting oil and gas from offshore to ensure supply to meet the increasing worldwide demand especially due to the continued depletion of onshore resources. Offshore oil and gas explorations represent an untapped, yet expensive, and inaccessible supply of valuable resources.

The fascinating land of Dagestan   The Republic of Dagestan set on the Caspian Sea between the staggering ...

IIKSS - The President of Azerbaijan, Ilham Aliyev, has issued a suite of Strategic Road Maps which will ...