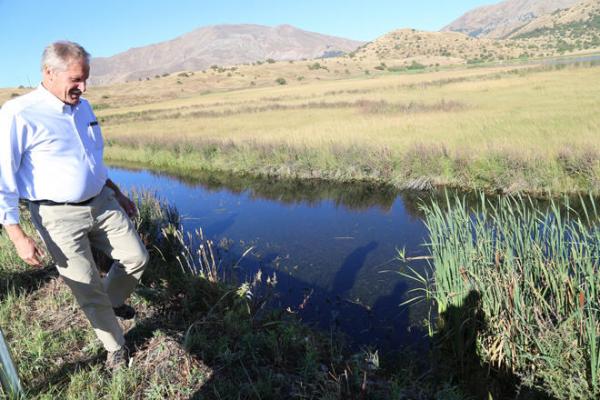 Our long term well-being depends on protecting the air we breathe, the water we drink, and the biodiversity we share. This common natural heritage binds together the United States, Azerbaijan, and countries around the world. As I travel to different parts of Azerbaijan, including most recently to Zangezur National Park in Nakhchivan, and see what is being done to protect the environment, I see parallels to what we are celebrating this year in the United States as we mark the 100th anniversary of establishment of our national parks system.

National parks and protected areas are places where shared values are enshrined for generations to come. Parks all over the world benefit the public and celebrate land and sea and cultural treasures. The richness and biodiversity of Azerbaijan’s parks are no exception. They are a valuable resource, encompassing diverse ecosystems from the semi-deserts of Shirvan to the deciduous forests in Hirkan; from the beautiful high mountains of Shah Dag to the shores of the Caspian Sea in Samur-Yalama and wetlands in Absheron. Seeing Goygol last fall was like being back in the northeastern United States. Azerbaijan’s nine national parks, 11 state parks and 24 state reserves are home to a wide variety of wildlife including eagles, gazelles, bears, wolves, deer, and wild boar. Some parks are famous as stops on migratory routes for flamingoes and other birds. The parks embody the diversity Azerbaijanis value and which needs to be protected and fostered in today’s world. This is one of the reasons I have greatly enjoyed visiting several of Azerbaijan’s national parks, including those in Absheron, Altagac, and Shirvan. My wife Anne and I firmly intend to visit all the remaining national parks in the year to come.

In the United States, we are celebrating the centenary of our U.S. National Park Service, which was established August 25, 1916. In 1872, the U.S. Congress established the world’s first national park – Yellowstone – which became the catalyst for a worldwide national park movement as countries adapted the model to suit their own circumstances.

We have found that national parks are vital to protecting biodiversity and marine environments, for combatting wildlife trafficking, preserving cultural heritage, and for mitigating and adapting to climate change. Parks help safeguard our shared environment by providing places for scientific collaboration, community engagement, promotion of healthy lifestyles, and education for our current and future generations. They have proven important as focal points for tourism and economic growth. For example, today more than 20,000 U.S. National Park Service employees care for U.S. National Parks, and each year visitors to U.S. Parks support more than 240,000 jobs in local communities and contribute over $27 billion to the U.S. economy.

I am proud of the role the United States has played in this global movement and see many of the things embodied by our National Park Service with each visit to an Azerbaijani national park. I encourage you to visit Azerbaijan’s parks and celebrate the great natural beauty that is this country’s rich heritage. Should you have the chance to visit the United States, you can “find your national park”