What are Russia's objectives in the Middle East and in the Caspian? Political and military events 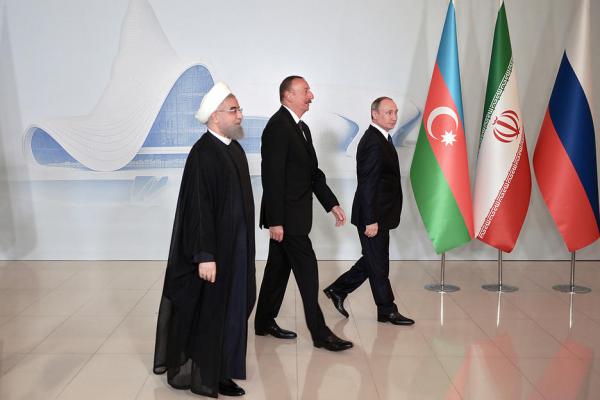 August was a month of active Russian diplomacy in the Middle East and the Caspian region. A meeting between Russian President Vladimir Putin, Azerbaijani President Ilkham Aliyev and Iranian President Hassan Rouhani took place in Baku on Aug. 8. On the following day Putin met with Turkish President Recep Tayyip Erdogan, the first encounter after a seven-month crisis in relations. On Aug. 10 Putin held a meeting with Armenian President Serzh Sargsyan.

Then, between Aug, 25 and 31, Russia's Caspian Fleet held unexpected drills in the Caspian Sea. Furthermore, in August the international community was caught by surprise by news of Russia's air force using a military base in Iran, although shortly afterward, due to reasons of misunderstanding, it was forced to leave.

Until the end of September 2015 Russia continued to actively use diplomacy in its Middle East policy, consistently defending a multi-track approach and a diplomatic solution to the Syrian crisis. The situation changed after September 2015 when Russia, upon President Assad's request, began a military campaign in Syria against militants from Islamic State, who had taken control of large swathes of the country.

"Russia has several objectives in Syria. First, it is the preservation of its presence. Secondly, the fight against radical Islam," explained Nikolai Kozhanov, Middle East specialist and Eurasia expert at the Chatham House program.

Moscow's involvement in the Syrian crisis was the reason for the conflict in Russian-Turkish relations. On Nov. 24, on orders from Ankara, the Turkish air force shot down a Russian Su-24 fighter that had violated its air space, an accusation that Moscow still denies. Consequently Russia introduced sanctions against Turkey and all contacts between high-ranking government officials were broken off.

Is a Russian-Turkish-Iranian alliance possible?

At the end of June the Turkish president sent Putin a letter with his apologies. On Aug. 9 the sides met in St. Petersburg. This led to many speculations on the possible alliance between Russia and Turkey, and Iran, whose government has recently been actively courted by both Ankara and Moscow.

Nevertheless, Russian experts believe that it is not worth speaking of any type of triple Russian-Turkish-Iranian alliance.

"There will not be such an alliance. Russia's policy in the region is very pragmatic. Russia wants to speak with everyone and preserve its good relations with everyone. Besides, Turkey and Iran have their own objectives in the region. Ankara is basically using Russia for its interests, since it wants to show the Western countries that it can easily reconcile with Moscow," said Kozhanov.

In the opinion of Igor Istomin, a professor at the Moscow State Institute of International Relations and expert on Russian-American relations, the external sides of the Syrian crisis are constantly maneuvering and trying to find profitable cooperation.

"Three countries are aspiring to leadership in the region: Turkey, Iran and Saudi Arabia. Moscow understands this perfectly and thus is trying to distance itself from close cooperation with either of the sides. Russia doesn't need allies in the Middle East. It wants to distance itself from everyone and at the same time reach its objectives," said Istomin.

The Caspian region – a zone for other interests

With regard to Russia's increased activity in the Caspian region, in the view of experts surveyed by RBTH, the region has never stopped being a sphere of Moscow's special interests, unlike the Middle East.

"Russia has always given great importance to the Caspian region," said Alexei Fenenko, expert on security and leading scientific collaborator for the Institute of International Security Issue at the Russian Academy of Sciences.

"Especially in the 1990s, when Moscow believed the region had enormous hydrocarbon reserves. But it turned out that there are not that many hydrocarbons there after all. But in terms of security, Russia has always been active in the region, so it's useless to say that it has renewed its activity only now."

Are there reasons for Western countries to be worried?

Western countries are actively following Russia's actions in the Middle East and the Caspian region. However, according to Igor Istomin and Nikolai Kozhanov, there are no grounds for being worried.

"For European countries Russia's involvement in Middle Eastern affairs does not present a threat. Perhaps it's a threat for the U.S., but it is a threat concerning status, for their reputation," said Istomin.

In Kozhanov's view, Russia is more dangerous for the region if it is ignored.

"Moscow needs to be spoken to,” he said. “It's necessary to take its interests into consideration. It will not be a leading player but it can provide cooperation on a wide range of issues. The West must understand that worries about Russia's increased activity in the Middle East can be both justified and not."

The upcoming Doha meeting on oil production will yield positive results on prices, yet it is far from an ideal ...