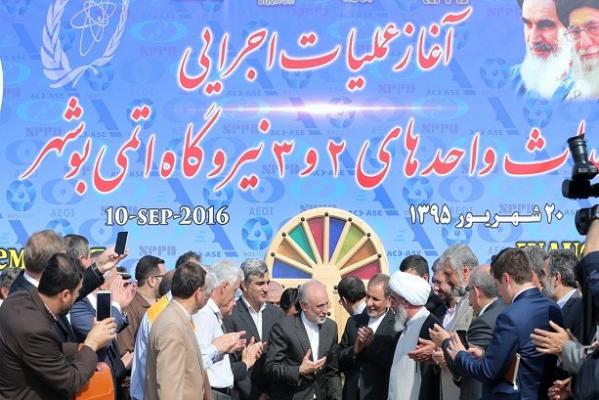 The execution operations on the construction of the second unit at the site of the Bushehr nuclear power plant, known as the Bushehr-2 project, has begun on Sat. with Iran’s first VP in attendance.

The units utilize unique technology and a new concept of safety, with higher efficiency and lower fuel consumption. The predicted time for the completion of the second unit is nine years, and the construction of the third unit will begin 18 months afterwards.

Resources for the construction of these two units have been estimated at approximately $10 billion. Once operational, the units will save up 22 million barrels of oil and prevent the annual emission of 14 million tons of pollutants.

Once all the three power-generating units at the Bushehr site come on stream, about 5 to 6 per cent of the country’s power generating capacity will be supplied by nuclear energy. Furthermore, 200,000 cubic meters of water will be desalinated.

The project for Bushehr-2 was presented by Russian nuclear experts in Tehran in September 2014. President Hassan Rouhani in late August gave the go-ahead for the construction to commence by allocating money to fund the project.