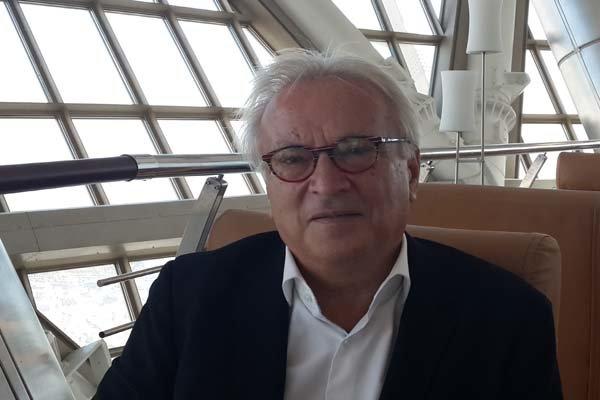 Payman Yazdani of Mehr News International Service asked Mr. Hannes Swoboda about possible ramifications of Chinese revival of Silk Road in response to US developments in South China Sea. He believed that Silk Road would provide China with an instrument in attempts to counterbalance any economic alliances which try to exclude the country, however, Russian and Chinese interests were not totally overlapped and any assumption of full cooperation of China and Russia would be naïve.

As Kevjn Lim of Washington Institute believes, “although China has long been Iran's largest oil customer, international sanctions recently relegated the Islamic Republic from third to sixth place among Beijing's suppliers -- a list consistently topped by Iranian rival Saudi Arabia. Similarly, while China's bilateral trade with Iran reportedly expanded to around $50 billion by late 2014, it remains dwarfed nearly elevenfold by its trade with the United States. Given these figures, why does Iran play a seemingly disproportionate role in Beijing's regional calculus, often to the puzzlement of its much larger energy and trade partners in Riyadh and Washington? Diplomatic brinksmanship aside, much of the answer lies in Iran's geostrategic value as a key hub in China's westward overland thrust, which Beijing views as essential to countering both Washington's eastward pivot and U.S. naval superiority.”

Recently, we have seen that China is waging efforts to revive the classical Silk Road. What are the reasons for this?

I think China has enormous population which it has to feed not only with food and drink but with many kinds of products to keep economy and give the people job. China has some resources but makes a lot of other resources and of course wants to make markets with big consumers. I think the basic idea is to safeguard the lines of resources coming to China and the goods going out of China. The Silk Road idea is to establish connection between China and the rest of the world as a safe connection.

What would be Iran’s role and status in this road?

I think Iran is in a central part of the Silk Road. In one hand, there is Turkey and Europe and in the other hand there is different Asian countries. China is also in competition with some of these countries. From one hand China has strong relation with Pakistan and from other hand it has not so close or even sometime competitive relation with India. I think Iran which has good relation with all these countries can play a role of mediation and bring these countries together. Iran is in the center of that kind of connection. It is also in the center of North – South connection from Russia to Arab world and east Africa. Geographically, geopolitically and geo-economically, Iran is really in the crossroads between east, west, north and south and has an important economic role.

What is the EU’s attitude toward Chinese Silk Road project? Does EU consider it as a threat, and thus would the EU be entrenched in line with the US policy to contain China?

Two philosophies, one is to contain China and the other is to integrate China in global political, economic and security systems. I think Europe believes in integrating China in the global system. You know many European countries has signed also the Asian Bank founded by China so the EU has much closer relation with China than the US. The US is also trying to have closer relation with China. Sometimes it is also seen that China is competitor to Russia and Russia is a problem for EU. It would be good to have China in our side or at least not have China in the Russian side because of this European think it would be good to integrate China. EU also tries to integrate Iran. Integration to global systems is much more fruitful than trying to contain a vast empire as China. We also know about conflict between China and other Asian countries and we have a peaceful solution for these conflicts and whatever we can we try to do in order to prevent military confrontation.

I think it can, when we get this connection infrastructure. I think Chinese contribution towards globalization is one of connectivity by connecting countries and creating more peaceful approach that is based on economic relations, respect and not on competition against each other. If Iran takes the chance and adds to the northern line which is coming to Europe from north of Iran, it would be very helpful.

Some analysts believe that the Brexit sought to strengthen Britain’s global role, especially in the Middle East because the strait jacket of the EU pinned down some of the ambitions of the once a global empire. What do you think of this?

This was one of the lines of arguments but not the most important and definitely was wrong to say the Britain promoted exit to have a bigger role again. We will see how now effective will be British military. British now alone is not very powerful. It may try play a bigger role but I think it would be very modest. Britain will have economic problems. Everybody says Brexit means less growth for Britain and it will cause less money for military expenditure, therefore I think yes there may be an argument on selling arms and improving positions but I don’t think it will be of great importance. Maybe there is a race between Russia from on hand and Russia and other countries from other hand especially after US pivot to Asia, there is a possibility but I would not exaggerate it.

Analysts believe that the US, Britain, Canada, Japan and Australia are going to form a new block to have more influence on international system. What do you think of this? If such an alignment appears to establish, can we expect formation of other rival alignments by Russia and China?

First of all, I should say that at the moment Canada is very interested in new military alliances on that way and the separatist British capacities will be very limited. We have a long discussions with them in EU how to sustain the connections despite of Brexit. I don’t think there will be a strong alliance. Of course if the US is leaning towards Asia because of pivot to Asia, Japan may have a bigger role. The confrontation of new alliances is possible. The interests of Russia and China are not totally overlapping. China is an economic leader. Russia is not a very advanced country and needs technologies rather from Europe and from the US. Many of the agreements between Putin and Xi Jinping is not yet matured and are not effective yet because there is not strong alliance and interest from China. Russia is more interested but China’s interest is rather limited, so I think that it is not a big issue. Finally I believe some countries like Turkey and Iran should think about strong cooperation in order not to be dependent on either on the American or on the Russian and Chinese side. Iran and Europe have great similar interests in trying to strengthen their independence, of course in an economical action, but not to be politically too dependent on the other side to have their own room to maneuver. We have to talk a lot about strong step by step alliance between Iran and EU.

The participation of Azerbaijani President Ilham Aliyev in the Warsaw NATO Summit 2016 is significant success of Azerbaijan’s diplomacy and ...