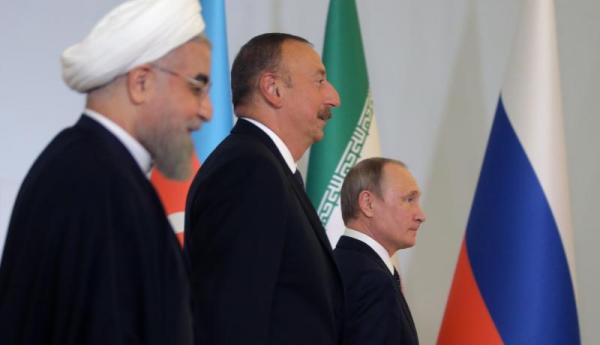 Faced with recent strains in the relationship, Moscow has expanded its dialogue with Tehran to issues beyond the Syrian conflict.
Hassan Rouhani, Ilham Aliyev and Vladimir Putin meet in Baku.

In early August, Russian President Vladimir Putin took part in a trilateral summit with his Azerbaijani and Iranian counterparts in Baku. Though the meeting was initiated by Azerbaijan President Ilham Aliyev, one of Moscow’s main goals was to strengthen relations with Iran, a key partner for Russia in Syria and the Caspian region and in energy. The relationship certainly needed a boost.
Syria is not enough

An obvious sign of trouble between the two is the decline of Russian−Iranian trade. In 2015 trade between the two was worth $1.24 billion – the lowest value in a decade. By mid-2016, long-discussed joint projects in the energy sector were still on the drawing board and the construction of the second and third power units of the Bushehr nuclear power plant had not yet begun.

Away from trade, relations are scarcely more impressive. Moscow’s involvement in the Iranian nuclear deal paved the way for interaction over Syria. But neither Iran nor Russia is satisfied. The Russian authorities would like to see Iran be more flexible and coordinate more closely in Syria. According to some sources, the Iranians have been reluctant to listen to Russian advice on military strategy in Syria which led to several serious defeats of the Syrian army and ‘Shia volunteers’. Reaching consensus with Tehran over Assad’s destiny has similarly been difficult. Tehran is also concerned that the Kremlin might see it as a subordinate rather than an equal partner in the Syrian conflict. Russia’s reluctance to take Iran’s side in its disputes with Saudi Arabia and in Yemen makes the Iranian elite question Russian commitment to the partnership. To allay Iran’s concerns, Moscow’s domestic propaganda has become more positive towards Tehran’s clients, the Houthis, in its coverage of the conflict in Yemen. Yet it is still not what the Islamic Republic expects from a supposed partner.

The brief deployment of Russian air forces to Iran’s Shahid Nojeh airbase was expected to improve things. Yet, it only demonstrated the limits of the dialogue. The blunt Russian propaganda that presented the deployment of air forces in Shahid Nojeh solely as Moscow’s strategic achievement in the region and not a product of cooperation only strengthened Tehran’s resolve to allow Russian planes on its territory as briefly as possible.
A new format

Under these circumstances, the Kremlin was compelled to make adjustments to its diplomatic strategy to secure Tehran’s trust. Thus, Moscow tried to widen the agenda by including Caspian-related issues such as South Caucasus stability, transport corridors, energy resources and pipeline infrastructure. Although these have been discussed before, it was the first time since the beginning of the Syrian crisis that these issues were given priority over other topics.

Before the Baku meeting, the interests of the post-Soviet countries were the priority for Moscow in the Caspian region. This damaged relations with Tehran, whose authorities had expected that all territorial issues of the Caspian Sea would be settled by consensus between all five littoral states.

But the necessity to share the Caspian region has compelled the two to sustain their dialogue even in difficult times, so Moscow believes that a twin-track dialogue on the Caspian and on Syrian issues will stand a better chance, and show Tehran that it is an equal. Russia and Iran can no longer ignore each other’s views on a wide range of issues including the Western presence in the post-Soviet republics of Central Asia and the South Caucasus, drug trafficking, terrorism, cross-border crimes, the frozen conflict in Nagorny Karabakh, the legal status of the Caspian Sea and the continued barriers to a trans-Caspian pipeline.

Moscow is also concerned that Iran or Azerbaijan, or both, may join energy projects that undermine Russia’s positions in European and Turkish energy markets. During the Baku summit, Putin again called for closer cooperation over oil and gas. Aliyev proposed ‘joint energy corridors’, allowing Putin to pretend that cooperation was not a solely Russian initiative. The trilateral format also helped Moscow formulate a plan to supply the northern provinces of Iran with natural gas via Azerbaijan in exchange for Iranian liquefied natural gas that Russian companies will receive in the Persian Gulf. This would allow Iran to decrease its dependency on Turkmenistan as its sole supplier of its natural gas, while the Russian authorities would be able to ensure that at least some Iranian gas will not reach Europe but, instead, will be channelled by Russian companies to south and east Asia.
The Kremlin’s signal

The Kremlin also used the discussions as a signal to those who question Moscow’s right to exercise its influence in the Caspian region and conduct dialogue with Iran beyond Syria and nuclear issues. The Baku summit was a reaction to a meeting between John Kerry and the ministers of foreign affairs of the Central Asian states held in Washington several days before. Russia wants to demonstrate that it, not the US or anyone else, is pre-eminent in Caspian affairs.

IIKSS - During the trip of the Head of Turkmen State, special attention was paid to the issues ...