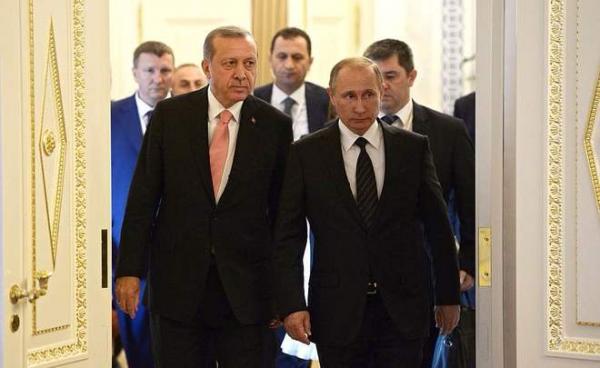 After Russian-Turkish relationship aggravation and TurkStream idea termination Europe started to look for alternative solutions for getting natural gas. American liquid natural gas by tankers and the Caspian Sea supplies have been among the candidates but after when Putin and Erdogan have finally reconciled the TurkStream is back on table and Russian gas seems to be the easiest one for EU.

Strengthening of relations between Vladimir Putin and Recep Tayyip Erdogan will feed European countries' gas addiction to Russia, believes Ellen R. Wald, a historian and scholar of the energy industry writing for Forbes.

After the November 2015 incident, when the Russian warplane was shot down by the Turkish forces near the Syrian border, the relationships between two states deteriorated and Russia cancelled the idea of TurkStream — a new gas route to Europe supposed to be completed in 2019. Now after the Turkish side apologizing and the ensuing meeting between two presidents the project is already back on table. The proposed route of the pipeline starts from southern Russian Krasnodar Krai, goes across the Black Sea to the Turkish Thrace, and ends in Ipsala — a town near the Greek border that is supposed to be a further delivery point for Europe. TurkStream would be based on infrastructure already built for the discontinued South Stream pipeline – another Russian project blocked after EU violating competition regulations in 2014.

Russia already provides up to 60% of Turkey's gas through the Blue Stream pipeline, working from February 2003, and the new line is supposed to be used basically for supplies to European countries, which are almost overly dependent on Russian natural gas. Like any dependence, it bothers the officials, and especially this concerns smaller countries with no access to the sea, such as the Czech Republic, Slovakia and Hungary that are pretty industrialized but don't have much energy resources. Earlier this year, the European Commission has presented some proposals aimed to reduce reliance on Russian gas, including plans to vet energy contracts with non-EU countries.

Being motivated in diversifying energy sources and looking for a way to avoid the relapse of the 'gas wars' of 2006 and 2009 when Gazprom stopped shipping through Ukraine, Europe after the beginning of Russian-Turkish confrontation finally started seeking for alternative gas providers. Most likely, it could be American liquefied natural gas (LNG) or LNG from Qatar or Australia. However, LNG imports require significant infrastructure renovation, including building new import terminals and some inner connecting pipelines. The first terminal was opened in Poland in 2015, and the projects in Greece and Croatia are still under discussion. LNG is also costly to transport over long distances because it requires special cryogenic sea vessels or road tankers.

Another way to obtain natural gas for Europe is to establish supplies from the Caspian Sea area via Southern Gas Corridor (SGC), the shorter pipeline supposed to be originated in Azerbaijan. However, the project is under construction now with first available supplies no earlier than in 2020, and estimated volumes are insufficient for taking a significant market share.

Back to Russian gas, it is cheaper and does not require many investments in the network. Since the cooperation between Russia and Turkey has been rekindled and TurkStream is again actual, it seems that Europe is likely to continue getting Russian supplies as the easiest ones. Nevertheless, the discussions about energy independence from Russia keep being held, and Richard Mallinson, a geopolitical analyst at Energy Aspects, considers that 'from a political and economic perspective, it's still very tricky for Moscow to make TurkStream stack up' because 'at the moment at least, the EU is saying it would prefer alternatives, more LNG (liquid natural gas) import terminals, and more pipeline supplies from Caspian (Sea) — not Russian – sources.'