Iran's 'New' Karrar Tank: "One of the Most Advanced Tanks in the World"? Political and military events 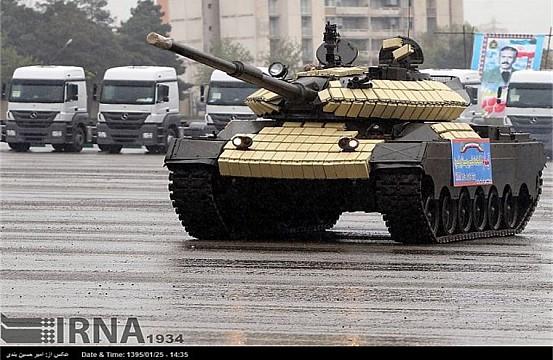 In March, Brig. Gen. Hossein Dehghan — Iran’s defense minister — claimed that a new, unseen Iranian tank called the Karrar “is one of the most advanced tanks in the world.”

He further suggested that the “tank [is] 100 percent Iranian made and it can even be superior than [the] T-90 in some degrees.”

Then in August, a tank with a close resemblance to the Russian-made T-90MS appeared on Iranian television. It flew a green, white and red Iranian flag from the turret … while spinning donuts.

It’s impossible to draw any conclusions about the new tank based on a grainy split second of video footage. It could be the Karrar — but even that raises more questions. A “Karrar” might be the Iranian name for a T-90MS, a locally-produced copy or just a cosmetic upgrade of the T-72.

Or something else entirely.

Russia’s T-90MS is a modern machine which can easily take on the best tanks in service around the world. It represents an evolutionary — not revolutionary — design philosophy. To simplify, the T-90 family combines the older T-72’s chassis with the T-80’s turret.

There are several reasons why the T-90 borrows from both tanks. The T-80 is plagued by troublesome turbine engines the Russians have since moved away from. But the main reason is to combine the strengths of both platforms.

The T-90 also comes with important upgrades such as active protection systems designed to throw off incoming anti-tank weapons.

And the T-90 is tough. In a rare glimpse of the machine in combat in February, an American-made TOW anti-tank missile fired by rebel fighters hit a Syrian T-90 but appeared to only cause minor damage.

The tank spotted doing donuts on Iranian T.V. certainly looks like a T-90MS. There are several clues including the turret’s shape, the slat armor covering the engine and especially the jagged, teeth-like skirting and explosive-reactive armor plating above the tracks.

However, there are several differences, as the blog Below the Turret Ring observed. The Iranian tank has a visible sleeve at the base of the turret, no additional rearward fuel barrels — as on the T-90MS — and it has a larger machine gun mounted on the top.
These are fairly minor modifications visible in a low-quality video, but the differences could be enough to indicate a second possibility. The tank might be an Iranian copy. Whether Tehran built it from scratch or cobbled it together from existing tanks, we don’t know.

However, it’s doubtful Iran can build a T-90 to the same specifications as the Russian version, and there is no evidence Tehran has a licensing arrangement with Russia for technical assistance regarding the T-90, although there has been chatter in the press about making such a deal since December.

Iran and Russia can make individual arms deals despite a U.N. arms embargo “on a case-by-case basis,” The Diplomat noted when news of a potential deal arose. Iranian officials have since walked back reports they may buy or seek technical assistance from Uralvagonzavod, the Russian company which manufactures the T-90.

“We were once interested in buying the Russian tanks,” Brig. Gen. Ahmad Reza Pourdastan, the Iranian army’s ground forces chief, told the Fars News Agency in February. “But since we can manufacture similar models within the country and we plan to do so in the near future, the deal is now off.”

According to Fars, Pourdastan claimed that Iran has the “technological know-how to produce new generation battle tanks and advanced military hardware.”

Another possibility? The tank is not a T-90 at all, but an attempt to dress-up one of Iran’s existing T-72s so it looks like one. If so, the tank may lack important countermeasures — such as anti-missile dazzlers — and modernized fire-control systems that make the T-90 what it is.

This would not be an unusual move on Tehran’s part. The Iranian military often exaggerates its capabilities for propaganda purposes. And lacking access to research, parts and supplies from abroad, Iranian engineers rely on creativity and engineering ingenuity to make up for shortcomings whenever possible.

In April, Iran revealed a new tank named the Tiam. But it’s not really new. The Tiam’s chassis is from an M47 — a 1950s design supplied by the United States during the reign of the Shah — and the turret is from a Chinese Type 59/69.

Another Iranian design, the Zulfiqar, is likely a jumbled-together combination of parts from the M48, M60 and T-72; the latter which comprise the bulk of Iran’s tank force. Iran has even dressed up some of its Zulfiqars to resemble the U.S. Abrams tank.

Iran's 'New' Karrar Tank "One of the Most Advanced Tanks in the World"?
0
0

Iran's 'New' Karrar Tank "One of the Most Advanced Tanks in the World"?