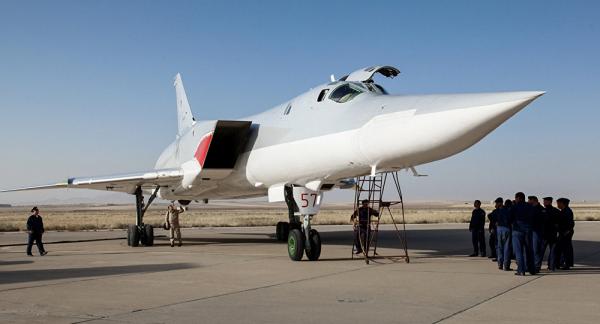 Russia and Iran share a common strategic goal – to fight terrorism in Syria and Iraq. Moscow will not deploy a full-fledged military base in Iran but may use the Hamadan airfield in the future, a military analyst told Sputnik. Last week, Russian Tupolev Tu-22M3 supersonic long-range strategic bombers and Sukhoi Su-34 strike fighters carried out several counterterrorist missions from Hamadan, an airbase in northwestern Iran.
However, later it was reported that Russia stopped using the airfield. The issue generated broad debates in Iranian political circles. "Discussions are underway in Iranian society and not only in Iran about the possibility of Russia using the Hamadan airbase. There are a number of different opinions on the issue. Distrust towards Russia still remains in Iran, as part of the Cold War legacy. Iran has an independent stance. The country has never allowed a foreign military base access to its territory," Russian analyst and journalist Vladislav Shurygin told Sputnik. Article 146 of the Iranian constitution does not allow a foreign nation to establish a military base in the country. The expert underscored that Moscow has no plans to deploy a military base in Iran. Moscow and Tehran are working together to reach a common goal – destroying terrorism in Syria and Iraq. "It is a partnership. Moscow and Tehran are sharing information with each other and providing support. As for Hamadan, Iran provided an airfield for temporary purposes," Shurygin said. The expert also recommended not paying much attention to the buzz around Russian aircraft and the Hamadan base. "Hysteria is fueled by the United States and its allies. Terrorists use it to drive a wedge between Russia and Iran," he said. Shurygin suggested that in the future Russian warplanes could return to Hamadan. "It is very important that Iran never offers the base to Russia. The point is that Russia could use it as a temporary airfield for conducting airstrikes. The base fully complies with Iranian law. But if needed, Tehran may let Russian aircraft use Hamadan for airstrikes in Syria because Moscow and Tehran have a common goal," he concluded.