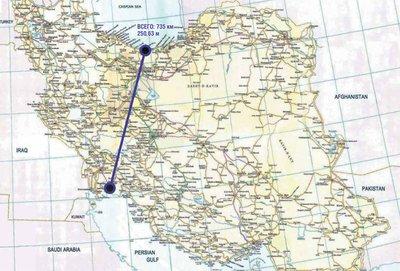 Baku, Fineko/abc.az. Russia has remembered the project of construction of the canal Caspian Sea –Persian Gulf, developed for the first time by Russian engineers in 1889-1892.

Thus, the portal of Russia’s Military & Industrial Courier points out that today such a canal is in the list of priority works for Iran, and negotiations with other countries about its construction are underway.

"Iranian experts note that canal Caspian Sea – Persian Gulf opens a direct way to the Indian Ocean not only for Russia, but also for the majority of countries of the former USSR and Europe. For potential users this way is shorter by more than half than the traditional water route through Turkey. Therefore the project elaboration involves not only Iranian, but also foreign experts. Commissioning of the canal is scheduled for 2020s," the Courier said.

Ship canal Caspian Sea – Persian Gulf, passing entirely through the territory of Iran, is capable to provide the shortest access to the Indian Ocean from the North Atlantic, Baltic, Black Sea - Azov Sea, Danube and Volga-Caspian basins. This route is necessary for the country not only as a transport corridor, but also to provide desalinated water to arid central regions.

"However, although it is at least promising, but it is still only a prospect," the Courier emphasized.

In 1998 a joint expert group was established to study the trans-Iranian water project, and next year the Iranian government formally approved the revised feasibility study.

"The total length of the shipping waterway is approximately 700 km, including on the waterway of rivers in the north-western (Caspian Sea) and south-western Iran, including about 450 km international channel Shatt al-Arab bordering with Iraq. The required investments for the construction of the whole artery were estimated by the Iranian side in 2012-13 at least $10 bn, including on the connecting trans-Iranian section (north-west – south-west) at $5.5–6 bn. The total recoupment of the project will come, according to local estimates, starting from the fifth year from the date of commissioning. According to the same estimates, the canal will provide transit revenues for Russia and Iran, $1.2–1.4 bn and $1.4–1.7 bn respectively, starting the third or fourth year of operation," the Courier said.

In turn, Ibrahim Mammadzadeh, the leading Azerbaijani expert in the field of water management, stated that realization of this project is virtually impossible.

"Anyone who has ever been in Iran will tell you about that," Mammadzadeh said.

In his opinion, the use of the Shatt al-Arab River is also questionable.

"This river is far from being a navigable artery, as well as other rivers mentioned in ‘the project’,” Mammadzadeh emphasized.

Iranian Ambassador to Azerbaijan Mohsen Pak Ayeen has described unity among Muslims as a way for putting an end to ...

IIKSS - Qatar has offered Azerbaijan to organize a forum of Islamic countries on the eve of the ...