Through Russia, with love: Why I rowed Europe's longest river to get to a wedding

Through Russia, with love: Why I rowed Europe's longest river to get to a wedding Tourism 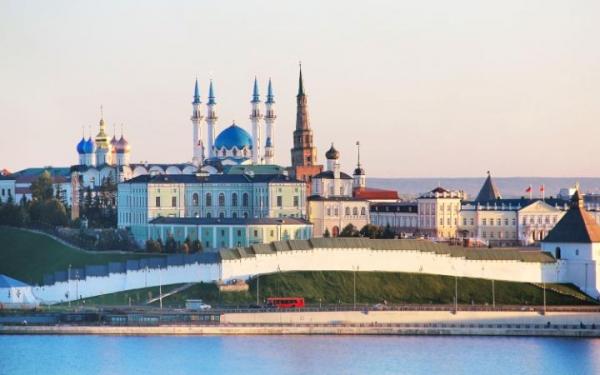 Through Russia, with love: Why I rowed Europe's longest river to get to a wedding

After an idyllic childhood in rural Dorset, travel author Thom Wheeler and his near-neighbour, playmate and schoolfriend Vicky Marshall went their separate ways in adulthood, but always kept in touch.

Wheeler studied Russian at university and, when able to get by in the language, lived and worked as a teacher and a tour guide in St Petersburg, and later in Ukraine, Estonia and Georgia.

“After a few months I decided to establish a small tour company, taking travellers to Russia,” says Wheeler. After completing an obstacle course in paperwork, he set up shop. Business was slow: his first four-day Imperial Gems of St Petersburg tour attracted a single customer. That customer was Marshall.

“My tour’s sole highlight was the Hermitage Museum, where I introduced her to Dmitry Spiritov, a local language-school owner I’d once worked for. To my surprise, during our whirlwind tour of the Hermitage, Dmitry and Vicky fell in love.”

Fast-forward two years and an invitation to their wedding in Astrakhan, on the Volga Delta edging the Caspian Sea, landed on Wheeler’s doormat. He decided to make the journey there through the heart of Russia by following the Volga’s 2,294-mile path from source to sea.

“As a Russophile, it seemed the obvious thing to do,” he says. “The Volga is Russia’s geographic heart, but environmentally it’s greatly in decline. The fishing industry is dying due to industrial pollution and there’s an exodus of people who once made a living along the banks of the Volga.”

Wheeler journeyed to the wedding through the heart of Russia, by following the Volga’s 2,294-mile path from source to sea

Wheeler’s book, The Way a River Went, describes his journey in detail, but is also a treasure-trove of assorted asides that paint an intriguing portrait of a country he knows well. Some describe colourful characters he met en route; others are brief biographies of heroes and villains in Russia’s long history, with links to places he passes through on his journey.

That journey began with a visit to a small chapel built at the source of the river, a rippling pool above which a wooden well has been erected. Lowering a bucket, Wheeler drew up water and sipped it in a customary local ritual.

Inside the chapel candles flickered and icons decorated the walls, while outside a small bridge festooned with garlands crossed the narrow stream or “little beginning” – etochnik in Russian.

Much further downstream, there would be places where the river was so wide that he was unable to see from one side to the other.

Wheeler did not make every mile of his journey by boat; on some legs he travelled by rail or road. From the source, he walked along the riverbank for the first few miles to the village of Volgaverkhovye. There, he met the man from whom he’d bought, sight unseen on the internet, a dinghy. Length: 13 feet. Name: Molly. Propulsion: oars.

After 50 miles, some of which he rowed (others Molly glided while Wheeler rested his aching arms), he reached Tver where, as pre-arranged, Molly’s vendor Captain Pasha met him again and bought her back for the same price Wheeler had paid.

“Then, with the words ‘You need it more than me’, he gave me a compass,” recalls Wheeler. Three buses, two trains, a taxi, a lift in a friend of a friend’s car, another in a 4x4 and a hitch-hiked truck ride later, he reached Kazan, and embarked on another boat ride – this time on a busy 30ft passenger vessel to Ulyanovsk.

From there, he took a cramped five-hour minibus ride to Tolyatti, and decided to walk the next stretch along the bank of the Volga to Samara, 61 miles away.

In his book Wheeler details numerous customs and explores aspects of the Russian character. Although river cruises between Moscow and St Petersburg feature the Volga, they sail only a short stretch of it, in addition to the Moscow Canal, Volga-Baltic Waterway, Svir and Neva rivers and Lakes Onega and Ladoga.

They do not travel the stretches Wheeler did, but his insights into the country that Winston Churchill described as “a riddle wrapped in a mystery inside an enigma” are certain to enrich your – albeit very different – cruise experience.

In Samara, Wheeler signed up for a river-rafting trip on the Volga, which was preceded by a sleepless night in a tent with four fellow adventurers and punctuated by one of them falling overboard.

Another train ride took him to Volgograd. He could have continued to Astrakhan by rail, but felt that he must conclude the journey and arrive at the wedding by boat. Cue a “private” cabin aboard the 60ft-long MS Lermontov, which he soon realised doubled as the ship’s laundry room. This last leg of his epic journey took 40 hours.

“Finishing on the river itself felt very appropriate,” says Wheeler.

He arrived with 24 hours to spare which, like every other day on his way, would prove eventful. At the wedding – a lively, vodka-fuelled affair with a choir whose repertoire ranged from Ukrainian hymns to Beatles hits – Wheeler and the bride, his childhood friend Vicky, were the only non-Russians.

The Way A River Went by Thom Wheeler is published by Summersdale at £9.99

By Elena Kosolapova - Trend: Despite the fact that the European Union is ready to resume talks with Russia over ...

Gallup: 85 percent of Azerbaijani people willing to fight for their country

Gallup International recently announced the results of their international survey on people’s willingness to fight for their country. Azerbaijan ranks at ...