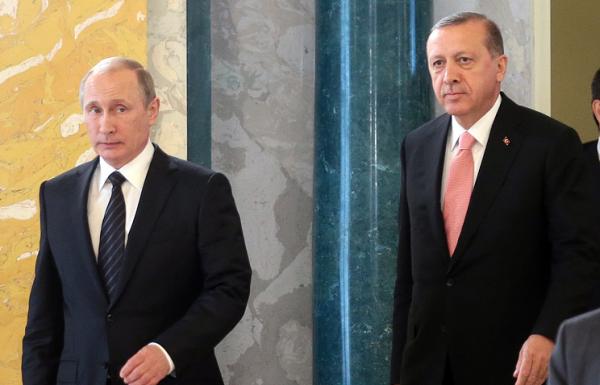 On the one hand, Russia is settling relations with Turkey and on the other, it expands relations with Iran
The current trend towards Russia’s cooperation with Iran, on the one hand, and the turn for the better in relations with Tehran’s regional rival Turkey, on the other, have made some analysts hopeful a new strategic triangle is in the making and in due time it may begin to cause considerable influence on the whole region of the Middle East. Experts polled by TASS are skeptical on that score, though. Tactical political interaction and an upturn in economic cooperation are on the agenda at best.

But even if this is really so, they remark, even a time-serving rapprochement among these three countries can play a positive role, for instance, in overcoming the Syrian crisis.
Tuesday’s meeting between Russian President Vladimir Putin and his Turkish counterpart Recep Tayyip Erdogan in St. Petersburg drew considerable attention, just as the trilateral summit of Russia, Iran and Azerbaijan in Baku the day before. On the one hand, Russia is settling relations with Turkey and on the other, it expands relations with Iran. Also, it looks like Ankara and Tehran - historically two major rivals in the region - have nothing against making steps toward each other. "We are determined to cooperate with Iran and Russia to address regional problems in the region side by side and to step up our efforts considerably to restore peace and stability to the region," Erdogan said shortly after the recent abortive government coup.

No triangles or rectangles; it’s all about tactics, not strategy

Currently there are certain factors that may cause Turkey, Iran and Russia to present a common front for a while, says senior research fellow Vladimir Sazhin, of the Oriental Studies Institute under the Russian Academy of Sciences. "It’s not the economy that I have in mind. It goes without saying that the economy is very important. I’m referring to progress in bilateral relations. But there will be no trilateral union, of course. It should be ruled out for many reasons. At best one can expect some tactical alliance. This is so because Iran, Turkey and Russia have certain problems in their relations with the West and with the United States."

"If one takes a look at the economic interests they share, it should be remembered that Russia, Iran and Azerbaijan - the host of the Baku summit - are countries that produce and export hydrocarbons," Sazhin said. "They have a great deal to discuss in view of the current strained situation on the world market. As for Turkey, its role as a transiter of hydrocarbons to the West may be significant. But I don’t think that this triangle (or rectangle, if Azerbaijan is to be counted) will be of strategic importance."

Sazhin sees no fundamentally new geopolitical aspects in sight. "It’s about getting back to where we had been all the time. Arabs constitute an overwhelming majority of the population in the Middle East. Non-Arab countries are few - Israel, Turkey and Iran. They had very close relations up to a certain point in the past - the Islamic revolution in Iran."

"In Iran, with its 80-million population, Turks and Azerbaijanis, who are ethnically very close to Turkey, constitute an estimated 18 million to 25 million," Sazhin said. "Bilateral relations existed not only at the Tehran-Ankara level. There were very strong people-to-people bonds. Plus the long-standing economic ties. But in politics post-revolution Iran and Nato member Turkey have drifted apart, of course."
"I don’t believe in the emergence of new political triangles," agrees leading research fellow Irina Zvyagelskaya, of the Arab and Islamic Research Center at the Russian Academy of Sciences’ Oriental Studies Institute. "I don’t think some strategic changes will follow overnight to bring about changes to the configuration of alliances. A number of steps we’ve seen our friends and partners and those we are not on very friendly terms with us take are tactical. They stem from the current situation."

Zvyagelskaya believes that to a large extent this is true of Turkey. "It is to be remembered that Erdogan’s wish to have closer relations is a result of certain internal political events, on the one hand, and soaring tensions in his country’s relations with the United States and the European Union, on the other. These steps by Erdogan are purely pragmatic and we should treat them accordingly. As far as I understand, nobody has any illusions on that score."

Interaction by Russia, Iran and Turkey may have a certain impact on the situation in Syria, Sazhin believes.

"In contrast to Iran, a country that Russia stands side by side with on the issue of the conflict in Syria, Turkey sticks to a conflicting stance. Some changes may be possible here, but only to a certain extent. There is the problem of Kurds and there is the problem of Turkomans, who reside in both Iraq and Syria. I do not think that Erdogan will agree to wholesale surrender. This is ruled out," he said.

"But some easing, at least a dialog between Moscow and Ankara on this issue is possible, and this is very good," Sazhin remarked.

"If we agree that a rapprochement is already in progress - and it does not matter for what reason - can this have some positive influences on the situation in Syria?" Zvyagelskaya asks. "In principle, yes. But Erdogan has his own ‘red lines.’ The Kurdish issue first and foremost."

"In this context the question arises to what extent he will be prepared to close the border, to conduct a more balanced policy regarding Assad’s participation in the talks and to agree to the preservation of his presidency for the transitional period," Zvyagelskaya went on to say. Most probably Erdogan will be ready to agree to greatly downscale his support for the radicals. "But this is already very good. Nevertheless, this is a rather complex matter and our interests here stand widely apart," she believes. In her opinion Iran’s relations with Russia on the Syrian issue are rather balanced. "Iran is a member of the coalition that is at war with the Syrian army. Iran, unlike Turkey, believes it is very important Assad should stay in office and gain strength."
Likely contenders

Zvyagelskaya does not rule out, however, that Russia in the longer term may develop rifts with Iran, bearing in mind both countries operate in the same energy sector. "Their interests may not coincide here and we may become competitors."

Whatever the case, she recalls, Turkey and Iran are Russia’s near neighbors and "it is not unimportant to us what policies they may pursue in Central Asia, in the Caucasus and so on and so forth."

"Our relations are far more comprehensive. They encompass not only the Middle East, but also regions that are far more crucial to us," she said.

Caspian horse The Caspian is a small horse breed native to Northern Iran. Although its original height probably ranged between 9 ...