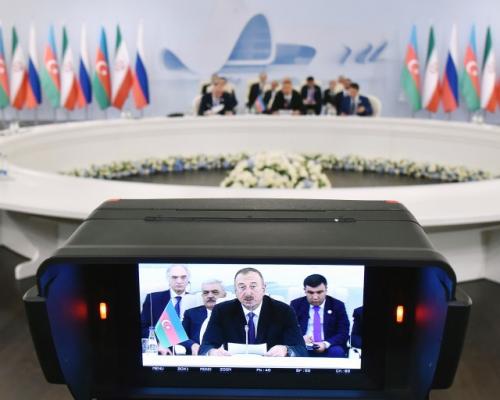 The balance in the Caucasus is changing. With Iran emerging from the malaise of sanctions, it is reaching north and becoming more assertive. Russia, too, is changing tack, aligning with Azerbaijan instead of Armenia in the long-running Nagorno-Karabakh conflict. In early August, Azerbaijan made a bid to capitalize on these changes by hosting the presidents of Iran and Russia for a summit in Baku. The meeting featured discussions of counterterrorism initiatives and of the negotiations on Nagorno-Karabakh and Caspian Sea disputes. But it was regional connectivity — not conflict — that topped the agenda, specifically the North-South Transport Corridor and its railway construction component.

The 7,200-kilometer (4,500-mile) North-South Transport Corridor was first discussed in 2008. It would involve building railway, road and shipping infrastructure stretching from Iran to Russia through Azerbaijan. Actually implementing the project, however, would be difficult — it involves a dizzying array of stakeholders and a $400 million price tag.

If realized, the North-South Transport Corridor would have a strong effect on the region's geopolitical order. It would connect Iran with Russia's Baltic ports and give Russia rail connectivity to both the Persian Gulf and the Indian rail network. At least on paper, this would mean that goods could be carried from Mumbai to the Iranian port of Bandar Abbas and further to Baku. They could then pass over the Russian border into Astrakhan before going on to Moscow and St. Petersburg, then onward into Europe. And the project has been progressing — railway connections between Iran and Azerbaijan are under construction, even connecting into the Russian system.

While regional heavyweights stand to accrue economic benefits from the project, the transportation corridor would be a major geopolitical asset for Azerbaijan in particular. Much to the chagrin of Tehran and Moscow, Baku has shown a willingness to cooperate with the West. The Azerbaijani government has participated in Western projects, such as the Baku-Tbilisi-Ceyhan pipeline, and signaled it wants to participate in the Trans-Anatolian pipeline and the Baku-Tbilisi-Kars railway. These would connect the Caspian and the Black seas. Azerbaijan's prominent role in the North-South Transportation Corridor would give it an advantage, in particular, over its major rival, Armenia.

But it is not the only prospective rail project for the Caucasus region. Two others have been floated: One from Russia through the breakaway Georgian region of South Ossetia and into Armenia and another through Abkhazia. Azerbaijan does not want Armenia to have a direct rail link with Russia, mostly for military reasons, though there are economic reasons as well. The North-South Transportation Corridor would further isolate Armenia because it would allow Iran to connect with eastern Turkey via the Baku-Tbilisi-Kars railway. This link with Georgia's Black Sea ports would bypass Armenia entirely, partly sidelining its ambitions for greater regional connectivity while enhancing Baku's standing.

The Baku summit could not have come at a better time for Azerbaijan. Relations between Russia and Armenia are tenuous, with Moscow pressuring the government in Yerevan to grant concessions in Nagorno-Karabakh. Armenian President Serzh Sarkisian's administration is also beset by violent protests and political discontent. And there are signs that Azerbaijan's push already has paid off. Only two days before the start of the summit in Baku, Russian President Vladimir Putin received Armenian leaders in Moscow for talks on Nagorno-Karabakh. Armenian Defense Minister Seyran Ohanyan said his country would not make unilateral concessions in the dispute, especially if Russia sold military equipment to Azerbaijan. Putin responded that Azerbaijan is an oil producer with gold reserves and a growing economy — and that it can buy what it pleases.

On the sidelines in Baku, Russian Deputy Prime Minister Dmitry Rogozin announced that Azerbaijan would sign a long-delayed contract to purchase 10 Irkut MC-21 airliners from Russia in February 2017. Russia also agreed to open a helicopter factory and an aircraft assembly facility in Baku. Following the Baku summit, Iranian media also published rumors that Iran and Azerbaijan are considering signing trade agreements with the Russia-led Eurasian Economic Union. Russia hopes that having Azerbaijan in the economic bloc would translate to it implementing more pro-Russian policies and military cooperation while reducing talk of Trans-Caspian natural gas projects with the West. Other outlets have not confirmed the rumors.

Despite its deepening ties with Azerbaijan, Moscow is unlikely to push Armenia too far. In spite of its apparent support for Baku over Yerevan, the Russian government understands Sarkisian's weak position and does not want his government to fall. And the Armenian president has made it clear his reluctance to make concessions over Nagorno-Karabakh has more to do with public discontent than with a concerted strategy. But the assets that Baku offers are too tempting to pass up at the moment. Armenia, like Azerbaijan, still needs Russia. And Russia has taken its usual approach of taking advantage where it can.

One of Azerbaijan’s top bankers has been jailed indefinitely as part of what appears to be an attempt by the ...