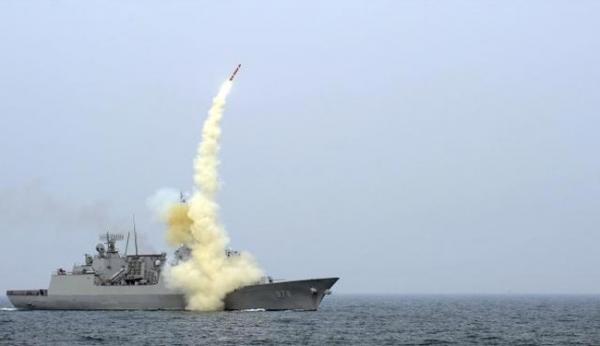 The Russian military says two of its ships have launched cruise missiles at targets in Syria from the eastern Mediterranean Sea.

Russia’s Defense Ministry says the Serpukhov and the Zeleny Dol corvettes launched three long-range Kalibr cruise missiles on Friday at Syria’s al-Qaida branch, formerly known as the Nusra Front. The ministry says the missiles destroyed a command facility and a militant camp near the militant-held town of Daret Azzeh, along with a mine-making facility and a weapons facility in the province of Aleppo.

Russian warships in the past have launched cruise missiles at targets in Syria from both the Caspian Sea and the Mediterranean, a show of the navy’s long-range precision strike capability.

The cruise missile strikes have added an extra punch to the aerial campaign Russia has conducted since September in support of President Bashar Assad’s military.

The development comes after Russia this week began using Iranian territory to launch airstrikes in Syria, with Moscow’s bombers flying out of the Islamic Republic for three straight days to hit targets in the war-ravaged country.

Residents of the northeastern Syrian city of Hassakeh took advantage on Friday of a lull in the fighting between Kurdish forces and Syrian government troops to flee to safer areas nearby, after fighting intensified the previous day with government warplanes bombing Kurdish-controlled positions in the city for the first time, activists and others said.

The fighting between the Kurdish troops and government forces could add a new dimension to the country’s deadly war, now in its sixth year, by potentially opening a new front in Syria.

The area around Hassakeh had witnessed battles between the two sides in the past but this week’s violence has been among the worst since Kurdish fighters took control of wide, predominantly Kurdish areas in northern Syria in 2012.

The main Kurdish force in Syria known as the People’s Protection Units, or YPG, has been the main U.S.-backed force in Syria and the most effective force in fighting the Islamic State group.

Last week, the Syria Democratic Forces, a coalition led by the YPG, captured the former IS stronghold of Manbij in northern Syria under the cover airstrikes by the U.S.-led coalition.

The Britain-based Syrian Observatory for Human Rights, an activist group that tracks the conflict, said the fighting first began Wednesday. So far, 16 people, including six women and children, have been killed on the Kurdish side. Five pro-government gunmen of the National Defense Force were killed as well, the Observatory said.

The Observatory said that Syrian warplanes struck areas under control of Kurdish fighters in Hassakeh, adding that there was no immediate word on casualties.

Also Friday, SDF official Nasser Haj Mansour told The Associated Press that fighting erupted again and was underway in several neighborhoods of the city. The YPG fighters captured several areas, including the wheat silos and the economics college, he said, adding that the Kurdish troops were advancing in the central neighborhoods of Ghweiran and Nashwa.

“We are fighting mercenaries,” Haj Mansour said, in reference to pro-government gunmen fighting on the side of President Bashar Assad’s forces.

However, Turkey and Iran have large Kurdish communities and both appear to be concerned about Syria’s Kurds gaining more areas under their control on the border with Turkey. Ankara also considers the YPG a terrorist organization because of its links to Turkey’s outlawed Kurdistan Workers’ Party, or PKK.

Jwan Mohammed, a former Kurdish official, said there was intense fighting overnight. A relative calm on Friday morning prompted scores to flee, mostly to nearby towns of Qamishli and Amouda. Speaking from Qamishli, he said that there were calls through mosques loudspeakers for the evacuation of civilians stuck in the areas of fighting.

The Observatory also reported residents were fleeing the city and that clashes picked up in the afternoon again. The Beirut-based pan-Arab Al-Mayadeen TV quoted an unnamed Syrian military official as saying that the clashes broke out anew after YPG fighters attacked military positions in the city on Friday.

YPG spokesman Redur Khalil denounced Thursday’s government air raids on Hassakeh as an act of “suicide,” adding that Assad’s forces would be held accountable for these “brutal, blatant attacks against our people.”

Week Ahead Political Diary: Erdogan to meet Putin for talks   ...