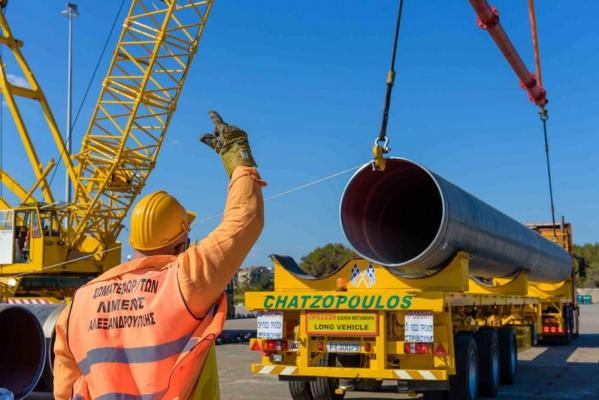 700+ line pipes to be used for the construction of TAP`s section in Greece have reached the port of Alexandroupoli, Azertac reported,

Connecting with the Trans Anatolian Pipeline (TANAP) at the Greek-Turkish border, TAP will cross Northern Greece, Albania and the Adriatic Sea before coming ashore in Southern Italy to connect to the Italian natural gas network.

The project is currently in its construction phase, which started in 2016.

Once built, TAP will offer a direct and cost-effective transportation route opening up the vital Southern Gas Corridor, a 3500-kilometre long gas value chain stretching from the Caspian Sea to Europe.

The pipeline's design has been developed in accordance with recognised national and international safety standards. All of this expertise equips TAP to deliver the project on time and to specification.

878 kilometres in length, TAP's highest elevation will be 1,800 metres in the mountains of Albania while its lowest depth offshore will be 820 metres beneath the Adriatic Sea.

TAP's initial capacity of 10 billion cubic metres (bcm) of gas per year is equivalent to the energy consumption of approximately seven million households in Europe. In future, the addition of two extra compressor stations could double throughput to more than 20 bcm as additional energy supplies come on stream in the wider Caspian region.

The pipeline will also have the so-called 'physical reverse flow' feature, allowing gas from Italy to be diverted to South East Europe if energy supplies are disrupted or more pipeline capacity is required to bring additional gas into the region.