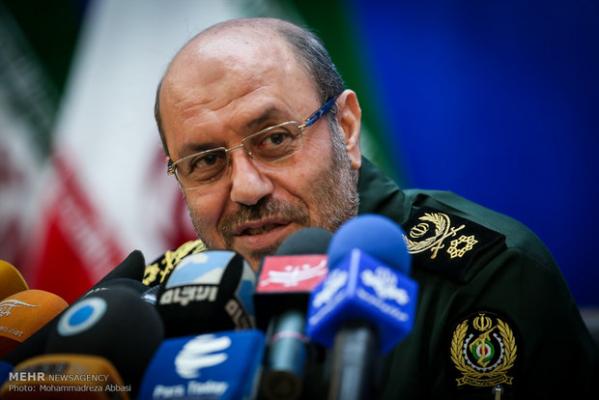 Iran’s Defense Min. said Russians announced use of Iranian military airbase in Hamedan without prior notice.

Brig. Gen. Hossein Dehghan made the remarks in an interview with the IRIB on Sunday where he talked in length about the country’s latest defense achievements and the current developments in the region.

When asked why Iran was not the first to announce the use of Hamedan airbase by Russian fighter jets, Dehghan said “firstly, Russians are keen on showing that they are a superpower and can greatly impact security trends. Secondly, they wish to appear as an effective agent in the scene of operations in Syria so that they will be able to negotiate with the Americans and guarantee their own part in Syria’s political future.”

The Iranian defense minister went on to add, “Russia became involved in the Syrian crisis at the request of the Syrian government. Syrians were lacking in the airstrike department so Russians planned to deploy a part of their air fleet there.”

“But after the short-lived ceasefire, the US, Saudi Arabia and Qatar began to arm terrorists with advanced weapons such as tanks, artillery and even armored personnel carriers,” he added.

Dehghan explained the reason for the presence of Russian fighter jets in an Iranian airbase, saying “given the new terrorist moves in Syria and the need for a much stronger confrontation with them, Russia’s air fleet needed to refuel in a closer area, hence the use of Hamedan airbase.”

The defense minister went on to clarify, “under no circumstances will we ever provide Russians with a military base. They have not come here to stay.”

Meanwhile, Dehghan touched upon the claims by American officials on the deployment of S-300 air defense systems in the eastern part of Tehran, adding “where we deploy our air defense systems is of no business to the US. The system will be deployed where it is needed and the decision will be made by aviation security commanders.”

Dehghan further announced that the Ministry plans to develop a heavy jet engine in a maximum period of three years and a consortium has been formed between the defense ministry, MAPNA Group and Oil Turbocompressor Co (OTC) to work on the project.