Second airbase would be provided for Russia Political and military events 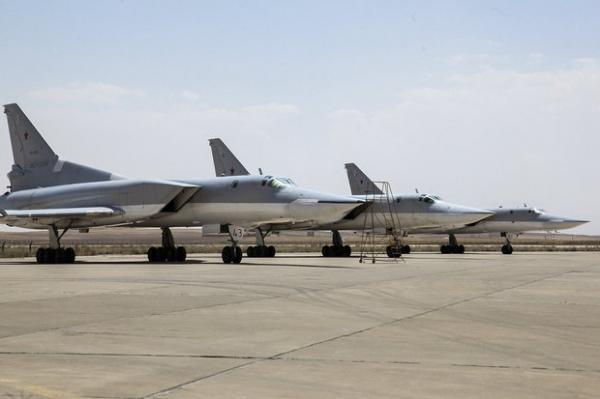 Defense minister has told a press conference on Saturday Iran would provide a second airbase to Russia if situation demands, as a measure in the framework of quadrilateral deal to fight ISIL.

Brig. Gen. Hossein Dehghan attended a long press conference to cover almost all issues in the region including Iran’s providing of an airbase to Russia whence Russian fighter jets would take off to target and destroy ISIL strongholds in Syria. This is an alternative to missiles fired from Russian submarines in the Caspian Sea which traversed Iran’s airspace, thus covering longer distance to reach targets in Syria.

Russia and S-300 dominated the press conference where Mr. Dehghan underlined that the act would advance the cause of the Resistance front and Syrian government in the fight with ISIL and other terrorist groups. He categorically defended the measure in Nojh airbase in Hamedan as conventional by international standards of warfare. The act has incited criticism by Iran’s archenemy Saudi Arabia and the US; however, in Tehran the situation is seen quite differently, and it is probable that as Mr. Dehghan told the press, a second airbase would be already present for Russian planes to take off from.

Defense minister also announced that S-300 had been received as completed package. Earlier this month, an Iranian official had told reporters that part of S-300 missile system had been delivered to Iran’s Defense Ministry. Now, Mr. Dehghan ensures the completion of a great project and also a great deal between Iran and Russia where the former even resorted to International Court of Justice when the latter faltered in her commitment to deliver S-300 earlier in 2015; Mr. Dehghan highlighted the priorities of receiving S-300 as strategic and which would provide Iran with a modern defensive advanced system and with one which create a balance in the region in terms of defensive capabilities.

Dehghan however said that apart from strategic S-300, Iran’s indigenous defensive industry had produced Bavar 373 which he said enjoyed capabilities very similar to S-300; he ruled out ‘reverse engineering’ of the Russian system accordingly.

On a question of recent Turkish shift of alliance, Mr. Dehghan believed that Turkey was attempting to expiate her past errors in its regional policies; he believed that a triangle of Saudi-American-Israeli alliance had been working to systematically weaken the Resistance in the region, however, after Islamic Awakening which swept North Africa and much of the Arab world of the Middle East, a coalition was formed where Iran spearheaded the real fight against ISIL, and later Russia followed the suit in joining the coalition; now with Turkey’s turning to Moscow, it was possible for Turkey to redress for her past misguided and hostile policies toward Syria and to join the collation, Mr. Dehghan further added.

He condemned the so-called triangle’s measures totally undermining the situation in Syria; “pragmatism and reappraisal of policies would help some of countries with affiliations with the triangle change positions in line with their own expediencies,” he told the press. “Turkey was a major stronghold of Takfiri terrorists for the most part of the crisis in Syria; Turkey supported their attempts to topple President Assad and to establish their own version of Islamic state there; however, recent events in Turkey was a boon for AK Party leaders to accurately see the scene only to come to a dark conclusion about their havoc wrought upon Syria by terrorists landing in Turkish airports from Europe and elsewhere,” he emphasized.

On Yemeni question, defense minister believed that Saudi military had been largely a paper tiger relying heavily on US weapons; even armed to the teeth, they had been completely defeated by Yemenis fighting with bare hands.

On a question of the situation in West Bank, Dehghan ensured Iranian support for any effort by Palestinians in their legitimate defense against Zionists; “we should wait and see what Palestinians would do in the West Bank; in any situation, Iran will support the initiative,” he told the press.

Dehghan rejected the allegations that Iran had provided for Russians an airbase and the speculations by the media that it would undermine Iranian constitution; “this is a convention in international community that allied countries help each other in times of need; with Iran a partner in Syria, we would help Russia a second airbase and no deadline would be set for the activity in the airbase. Contrary to claims, no Russian plane and or fleet has been deployed in the airbase and they use it for fueling and taking off toward Syria,” he told reporters.