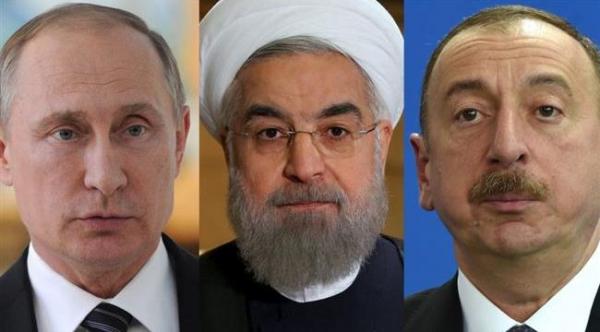 President Rouhani said the Monday meeting in Baku aimed at promoting Iran-Russia-Azerbaijan relations will meet the interests of the three countries as well as the whole region.

President Rouhani made the remark in a meeting with Iranians residing in the Republic of Azerbaijan late on Sunday in Baku, adding “today, all countries acknowledge that Iran’s role in the region’s security is effective, positive and significant.”

Iranians are the ambassadors of religious and national culture wherever they are, said Rouhani, while highlighting Azerbaijan’s religious, cultural and historical advantage over other neighboring countries; “we should use this opportunity to the benefit of the two nations and governments,” he added.

“The Iranian government has adopted a win-win approach to the nuclear negotiations and also its relations with other countries,” he stressed.

Rouhani went on to add, “we are willing to develop ties with all countries throughout the world, except those that are seeking hostilities towards Iran. We seek to represent kindness and serving the humankind, unless someone tries to undermine Iranian nation’s territorial integrity.”

Referring to developing ties between the two countries, Rouhani added “inauguration of automobile manufacturing and pharmaceutical factories by the Islamic Republic of Iran in the Republic of Azerbaijan will be beneficial to the people of this country and the region.”

He further added that the north-south transit line, which will connect the Caucasus and even Europe to the Persian Gulf states, will be finalized through Iran-Azerbaijan cooperation.

Elsewhere, at the meeting of high-ranking delegations of Iran and Azerbaijan, President Rouhani attached great significance to friendship and development of ties with Eurasian countries, the Caucasus region and especially Azerbaijan, and called for establishment of free trade.

Iran has urged Azerbaijan to activate the secretariat in Baku as soon as possible to address the environmental issues regarding Caspian Sea, Rouhani added.

“Settling regional issues is possible through discussion and dialogue and the Islamic Republic of Iran will spare no effort in the full restoration of peace and stability in the region,” he stressed.

President of the Republic of Azerbaijan Ilham Aliyev, for his part, said “Baku is willing to develop ties with Iran in all fields and strong relations between Tehran and Baku will have positive effects for the region.”