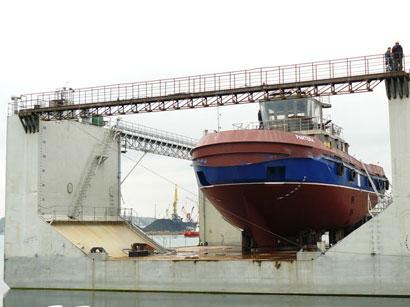 Russian shipyard Red Sormovo, which is a member of a group of companies "Sea and oil & gas projects" (MNP group), intends to expand partnership with Azerbaijan.

Representatives of the MNP group management took part in the extended meeting of the Russian-Azerbaijani and Azerbaijani-Russian business councils in Baku on August 8, the Moscow representative office of Red Sormovo said.

"The goal of participation was the development of further relations of PJSC Plant Red Sormovo with business partners and potential customers from Azerbaijan," the office said. The meeting was timed to the visit of Russian President Vladimir Putin to Azerbaijan and aimed at enhancing economic cooperation between the two countries.

In the framework of the business program of event, business representatives of various industries of Azerbaijan and Russia held bilateral meetings. Executive Director of MNP group Vadim Malov and the Deputy CEO Murat Duguzhev discussed the prospects of further cooperation in the field of shipbuilding with their potential partners.

Malov stressed that Azerbaijan being one of the key players of oil and gas market in the Caspian region will always be of interest to manufacturers of oil and gas tankers, and Red Sormovo has obvious advantages in that field.

“Projects for Azerbaijan Caspian Shipping Company, implemented earlier by the group of MNP and Sormovo shipbuilders, have created a basis for long term partnership with ship-owners operating in the country. Therefore, we continue to participate in such large-scale bilateral meetings. As a rule, they are quite productive,” Director of MNP added.