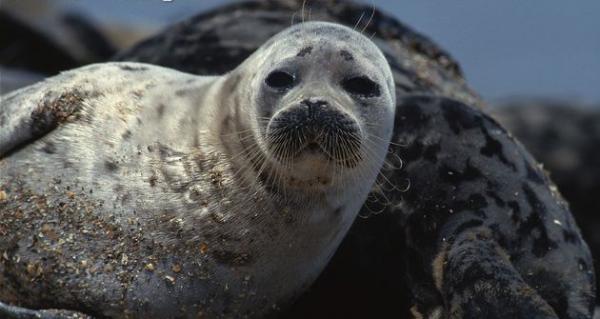 The 20th century was not kind to the Caspian seal.

About 100 years ago, an estimated 1 million of these four-foot-long marine mammals swam the waters of the Caspian Sea, the world’s largest landlocked body of water, which sits between Russia, Iran, Kazakhstan, Azerbaijan, and Turkmenistan.
Advertisement

That was before decades of hunting took their toll, killing hundreds of thousands of pinnipeds. Seal hunting in the Caspian ended in the early 1990s, but the end of that decade brought a new menace: a massive outbreak of canine distemper, which killed thousands of the seals, bringing the population as low as 100,000.

“That’s a relatively high number for an endangered species,” said Simon Goodman of the University of Leeds in the United Kingdom, who has been studying the seals since 2004. “But compared to the historical abundance, it’s a decline of more than 90 percent since the start of the 20th century.”

The decline is why Goodman and other researchers from around the world are studying the Caspian seals—to help provide an understanding of how the species is doing and what it needs to survive the latest threats: oil and gas drilling, pollution, and overfishing.
New clues come from a groundbreaking satellite study that tracked the behavior and movements of 75 Caspian seals for nearly a year. The study, published July 28 in the journal Marine Ecology Progress Series, reveals an amazing array of behavior. Some seals stayed at sea for six months at a time before coming back to land. Others stayed closer to shore. Some swam in shallow waters, while others made deep dives. One seal traveled nearly 8,500 miles over the course of the study. (You can follow all their journeys in the time-lapse video above.)

The study, Goodman said, could help identify important seal habitats that could become protected areas for the species. Early discussions for setting up those areas are under way, and Goodman said signs are good that things are starting to move forward.
It’s an important step, as the study also revealed that some of the seals frequently travel through areas that could put them at risk.

That’s because the threats Caspian seals face are not all in the past. Dangers that have emerged in the 21st century include rampant overfishing and incredibly high levels of pollution.

“Pollution of the Caspian Sea began in the Soviet era and continues today,” said Jeffrey Levengood of the University of Illinois at Urbana–Champaign, who has researched high levels of heavy metals in two of the region’s duck species. Similar research has revealed heavy metals in Caspian turtles and fish, while multiple studies have found pollution in the sea’s sediment. Levengood’s coauthor, Mohammad Hosein Sinka Karimi, a Ph.D. candidate at Iran’s Malayer University, said many of the problems stem from untreated sewage discharged into rivers, unsanitary landfills, and agricultural wastewater.
Advertisement

Oil and gas development in the Caspian Sea also contributes. “Russia and Azerbaijan are considered the worst polluters, but the other neighboring countries are too, with the rush to further develop,” Levengood said. Oil spills from existing platforms have been large enough to track from space. Meanwhile, one of the world’s largest new oil fields, known as Kashagan, is expected to go online later in the year.

RELATED: The Unseen Slaughter Under the Sea

“That kind of development needs to be done in an environmentally sensitive way,” said Goodman. He said data like that contained in the new paper can help with development and management plans to minimize the impact on the seals.
Research done following the canine distemper outbreak found that only a small portion of Caspian seals in the late 1990s carried high levels of pollutants. Goodman said it’s time to reassess the situation to determine how the animals are faring with today’s pollution levels.

For now, though, his main concern lies with illegal fishing for Caspian sturgeon, which supplies the international demand for caviar. A grisly photo he shared showed 20 dead seals entangled in a sturgeon net, while a paper he coauthored in 2013 found that 1,215 seals were killed as bycatch by 78 sturgeon poachers during the 2008–2009 fishing season. Goodman said that probably represents a “tiny fraction” of the total number of seals killed per year. “I think that’s a potentially catastrophic problem, both for sturgeon and Caspian seals, which are collateral damage,” he said.

Poaching and pollution have received relatively little attention in Western media. “No one ever talks about the Caspian,” Goodman said. “I think it’s definitely underreported and relatively unknown.” He said the number of oil and gas pipelines going through the region make it geopolitically important and worthy of notice.
“Most of us aren’t interested in environmental problems so far away,” Levengood added. “How many people know the Aral Sea story—the complete collapse of a once vibrant inland sea? I think it’s important for all of us to be aware of these issues, if only to remind us how vulnerable even these huge ecosystems can be and how important meaningful environmental regulation and intergovernmental cooperation are in the sustainability of trans-boundary resources, such as North America’s Great Lakes.”

As for the seals, Goodman said the satellite telemetry work he and his colleagues are doing will result in several additional papers, and he hopes they will help contribute to sustainable decision making on the part of the various players in the Caspian region. “It’s not our place to tell the governments what to do,” he said. “It’s up to us to provide the information and let them decide what to do.”