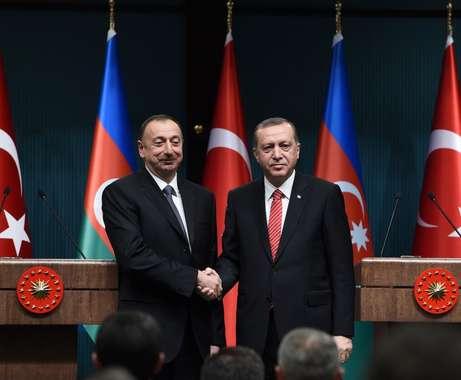 Amid the global economic crisis, sharp drop in crude prices, political chaos and bloodshed in the Middle East, as well as increased threat of terrorism, cooperation between Azerbaijan and Turkey gains much more importance.

From this angle, Azerbaijani President Ilham Aliyev's visit to Turkey on March 15 immediately after deadly attacks on the capital gains special importance in terms of demonstrating joint position on global threats.

This visit in facts demonstrated the truly fraternal relations between the two countries, founded on a principle of "one nation, two states" -- a fundamental stone in every moves of the nations.

It is also accepted as a symbolic gesture by the Azerbaijani leader to be with Turkey in its difficult time, when the country faced a terrorist attack on March 13 killing 37 people leaving over 120 injured.

Azerbaijan, which has repeatedly suffered from the Armenian terrorism, strongly condemns terrorism in all its forms and during the visit the president voiced his country's support to the fraternal people of Turkey.

Turkey was with Azerbaijan in the most difficult period for the country as well. The country once again made it clear that it strongly supports Baku in the liberation of the occupied territories of Azerbaijan and in the Nagorno-Karabakh peace process.

The Nagorno-Karabakh conflict emerged in 1988 over Armenia's territorial claims against Azerbaijan. More than 20,000 Azerbaijanis were killed as a result of large-scale hostilities and over one million Azerbaijanis are unable to return to their homes because of the invasion. Armenia continues the occupation of Azerbaijani territories, which in turn obstacles the regional security and peace.

One of the important messages voiced during President Aliyev's Ankara visit was the two countries' interest in further developing military and defense cooperation. Continuing joint military exercises of the two countries' Armed Forces during this visit could be seen as a symbolic gesture.

Azerbaijan, in turn, has recently developed the defense industry. If earlier Azerbaijan was consumer of military equipment and weapons, now the country has become the producer and exporter of a number of weapons, ammunition, and military technology.

Taken the military and defense potential of the two countries into account, one can say with no doubt that Azerbaijan and Turkey will have serious prospects of cooperation in the future as well.

President Aliyev and President Erdogan decided to hold the 3rd Meeting of the Turkey-Azerbaijan Defense Industry Cooperation in the coming months.

Azerbaijan-Turkey enjoyed strong relations for centuries due to a common culture and history and the mutual intelligibility of the Turkish and Azerbaijani languages.

Turkey was the first country in the world to recognize Azerbaijan's independence in 1991 and has been a staunch supporter of Azerbaijan in its efforts to preserve its territorial integrity and realize the economic potential that arises from its rich natural resources in the Caspian Sea.

Azerbaijan and Turkey enjoy good and developing economic ties, especially in terms of huge energy projects envisaging the transportation of Azerbaijan's hydrocarbon resources to the European and world markets through the Turkish territory.

Along with the political importance, this visit was also important from the viewpoint of realization of joint energy and transport projects.

As part of the visit it was decided to accelerate the works towards the implementation of the Trans-Anatolian natural gas pipeline, which will bring Azerbaijani natural gas to Turkish and European consumers.

Today, Azerbaijan and Turkey are the beneficiaries of all the major projects in the region, in particular the Southern Gas Corridor, which comprises TANAP and TAP projects, as well as the Baku-Tbilisi-Kars railway.

If the TANAP project is in full swing, the largest transport project in the region - the Baku-Tbilisi-Kars railway has entered its final stage. This project, which will connect the continents, will play an important role in the economies of both Azerbaijan and Turkey. It will turn the two countries into the transit point for transportation of goods from Asia to Europe and vice versa. It will bring significant revenues to the budgets of these countries. By agreeing the transport policies and tariffs, Baku and Ankara will be able to establish the most competitive route for cargo delivery.

Today, the partnership between Turkey and Azerbaijan has become a driving force forming policy and economy of the region. The two countries complete each other. The political weight of Ankara is supported by the economic projects implemented at the initiative of Azerbaijan. This unity allows Baku and Ankara to respond all modern challenges.

IIKSS- Turkmenistan and Malaysia aim at enhancing of the mutually beneficial cooperation in trade, energy sector, as well ...