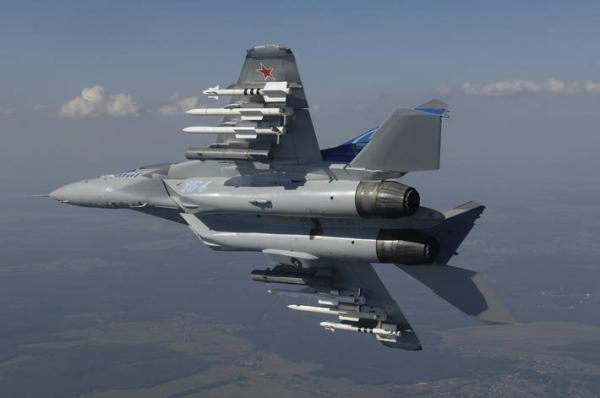 The Mikoyan MiG-35 Fulcrum-F is set to enter testing in 2017 with deliveries to the Russian Aerospace Forces starting in 2018. Flight tests for the new advanced Fulcrum derivative—which were originally scheduled for this summer—have been pushed back due to production delays.

“Development work under contract with the Ministry of Defense on the MiG-35 is currently ongoing,” Vladimir Mikhailov, the head of United Aircraft Corporation’s (UAC) directorate of military aircraft, told the Moscow-based TASS news agency. “They are a little behind schedule because of some fault with enterprise cooperation delaying deliveries of components, but we can say that in general the problem is solved.”

However, UAC’s Russian Aircraft Corporation-MiG division expects to make up for the production delays next year. “We will catch up with the schedule in 2017,” Mikhailov said. “The will be a very brief trial of the machine since the prototype has already repeatedly proven itself.  The aircraft will be supplied to the VKS [Vozdushno-Kosmicheskiye Sily] in 2018.”

UAC has not signed a production contract with the Russian Ministry of Defense. That will have to wait until the MiG-35 completes testing. However, the Russian Air Force was previously expected to buy an initial batch of thirty-seven MiG-35s. The jet is expected to become operational in 2020.

The MiG-35 is an advanced derivative of the original MiG-29. While the airframe is similar, the aircraft is practically a new design under the hood. Compared the to original Fulcrum, the MiG-35 adds a completely new fly-by-wire control system, a lighter airframe, more fuel capacity, more efficient engines and thrust-vectoring nozzles. Moreover, the Russians are developing single and two-seater versions of the jet based on the same outer mold line to maximize commonality.
More importantly, the MiG-35 will add a completely new avionics suite. The new jet will incorporate Russia’s first operational fighter-mounted active electronically scanned array radar—called the Zhuk-MA. The radar is able to track fighter-sized targets at ranges greater than 85 nautical miles.

The MiG-35 will also be equipped with a unique optical locator system (OLS)—which is a passive air-to-air electro-optical sensor that operates in both visual and infrared wavelengths. The Russians believe that the OLS sensor will be useful in countering stealthy aircraft like the F-22 and F-35. The MiG-35 will also incorporate a powerful electronic warfare suite—an area where the Russians excel.

RSK-MiG—which falls under the aegis of the United Aircraft Corporation alongside arch-rival Sukhoi—hopes to recapture some the Mikoyan design bureau’s old glory with the new advanced MiG-29 derivative. RSK-MiG’s Fulcrum product line has been overshadowed by Sukhoi’s larger and more capable Flanker series in the years since the collapse of the Soviet Union. The MiG-35 might be the RSK-MiG’s last hope of regaining some of its lost market share on the international fighter market.