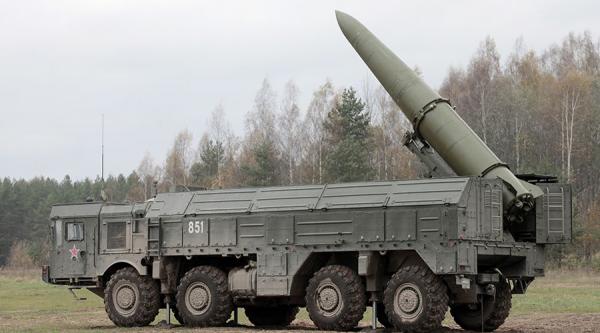 Moscow has been forming a force to counterbalance NATO’s massive military buildup along Russia’s borders in Europe, which will operate along its western and southern borders, according to Russian Defense Minister Sergey Shoigu.

Shoigu named NATO’s military buildup in Eastern Europe, the overall situation in Ukraine, and growing terrorist activity in the Caucasus region as the three principle drivers behind Moscow’s military upgrade.

“In the given conditions, we have to take commensurate reaction measures,” Shoigu said, while speaking at a Defense Ministry board session.

Since 2013, the Defense Ministry has conducted over 200 drills in the southern military district, the minister reported.

Four divisions, nine brigades, and 22 regiments have been formed there from scratch, Shoigu said.

Two of the newly-formed divisions are missile units armed with Iskander-M tactical quasi-ballistic missile complexes that have greatly augmented the proven hard-kill capability of the southern task force.

The minister particularly stressed that, following reunification of Crimea with Russia in 2014, the region has been completely re-armed and the troops deployed there have become a self-sufficient task force armed with Bal and Bastion surface-to-sea anti-ship missile systems, S-300V4 and S-400 air defense missile complexes, and Buk-M2 and Pantsir-S1 (NATO designation SA-22 Greyhound) cannon-missile systems, as well as other upgraded systems.

“As a result, the air defense capability in the southwestern strategic direction has grown by 50 percent,” the minister claimed.

Over the last three years, the southern military command has added over 4,000 units of new and modernized military hardware altogether.

In addition, the number of contracted professional servicemen serving in the southern task force has grown twofold, Sergey Shoigu said.

IIKSS- Iran is to open the largest port in the Caspian Sea within a year, and the future ...