Caspian Energy Grid (CEG) - a Plan B for the region Energy 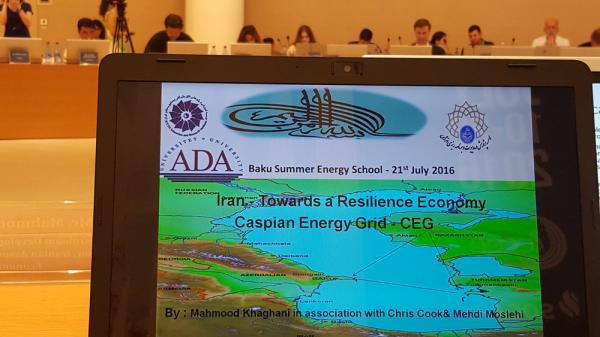 Since my mother is an Azeri, Azerbaijan is literally in my blood. In fact the Islamic Republic of Iran views the people of Azerbaijan as brothers rather than simply as friends and neighbours. I was therefore genuinely pleased to accept the kind invitation of the Caspian Center for Energy and Environment, ADA University to visit Baku to address their 10th Baku Summer Energy School on the subject of Iran's Caspian Perspective.

My first visit to Baku decades ago was during a mission as a member of Iran’s negotiating team from Ministry of Petroleum.  At that time after the fall of the Soviet Union, times were hard, and Azerbaijan's oil industry was in deep trouble, both financially and environmentally.  My report led to a delegation to Baku led by Iran's Oil Minister and in time to a 10% share-holding in the Shah Deniz gas field. From this base, my colleagues and I developed an Iranian doctrine of energy co-operation through a range of innovative energy swaps such as gas for gas, oil into Northern Iran exchanged for oil delivered from the Persian Gulf (the Caspian Oil Swap); and a gas for power swap with one of Iran's Northern neighbours which became known as Energy for Peace.

Since I last addressed the Summer School gathering (now over 50 participants) of the global oil & gas industries brightest and best students in 2009 I found myself struck by the new Baku which has been built. But I also observed that the stream of oil and gas wealth which financed this wave of construction has now slowed dramatically as oil prices collapsed and the Azeri currency fell with it. Having suffered the effects of physical and financial sanctions in Iran for so long, I knew precisely how my hosts must have felt when financial flows are cut off.

So, it was that I came to be presenting to the assembled students and experts the Caspian Energy Grid initiative, following its Tehran launch on 20th June and London launch on 14th July before Iran's Energy Minister H. E. Hamid Chitchian and his delegation.

Perspectives – the U.S.
It was a pleasure to meet once again and hear from former U.S. Special Envoy on Caspian Sea Energy Affairs H.E. Ambassador Steven R. Mann with whom I had many differences of opinion at international conferences during my tenure as Director General for Caspian Sea Oil and Gas Affairs at Iran's Ministry of Petroleum.  However, Ambassador Mann now advises Exxon Mobil and we both view regional energy from a more neutral business perspective, leaving geopolitical differences behind.

He made some interesting strategic observations beginning with International Oil Companies (IOCs) compared to National Oil Companies (NOCs). He pointed out that for IOCs, everything comes down to shareholder value (shareholder imperatives) while for NOCs, the long-term exploitation of the fields and an array of social and political considerations determine the company’s choices (societal imperatives).

He then observed that the corporate culture of particular companies shapes their behaviour. In the case of ExxonMobil a bottom-up approach enables engineers on the ground to make choices and suggest company-level decisions (such as investment on a particular field etc.).

He then gave his forward-looking 2040 perspective, where he foresaw steep growth in developing countries leading to growth in energy demand. However, he suggested that oil would remain a primary source of energy – driven by transportation, principally for heavy duty (trucks, planes and ships). However, he envisaged demand for car transport would decrease (due to much more energy-efficient cars, despite a sharp rise in their number) and to energy efficiency from growth in hybrid cars, plus other technologies (Natural Gas, hydrogen fuel cells, full electric etc.). He also foresaw growth in the chemical industry.

He envisaged that natural gas will have the fastest growth particularly for electricity generation where Chinese gas demand will skyrocket. He also foresees the rise of unconventional gas supply (fracking). He observed that energy efficiency allows and will allow for reductions in energy consumption equivalent to the discovery of a whole new energy source (the “Fifth Fuel”).

SOCAR perspective
My friend Elshad Nassirov Vice President of SOCAR (who speaks Farsi) outlined SOCAR’s Strategy and said their focus is on vertical integration internationally in order to contribute to the Republic of Azerbaijan’s development.  In order to achieve this, SOCAR aims to Increase exports of natural gas and international activity, while increasing and consolidating domestic activities (refining, marketing, petrochemical activities) and enhancing operational efficiency

He added that the Republic of Azerbaijan enjoys a reputation as a reliable business partner, illustrated by the fact that contractual terms had never been modified without the written agreement of all parties.

He provided the participants with historical back ground of the Republics of Azerbaijan recent petroleum history, beginning with the 1994 “contract of the century” Production Sharing Agreements with major IOCs such as BP. In 1999: the Shah Deniz gas field (one of the world’s largest) was discovered offshore in the Caspian Sea and Iran holds 10 percent of its share capital.

In 2006 the BTC oil pipeline (Baku-Tbilisi-Ceyhan [Turkey]) became an outlet for the Republic of Azerbaijan’s landlocked oil reserves. He explained that Russia would have preferred the Republic of Azerbaijan to double its Baku-Novorossiysk pipeline capacity, but SOCAR decided against this because of the long waiting time for tankers to transit the Bosphorus strait due to the high volumes of oil traffic. He added that Georgia wished for a future pipeline Baku-Supsa, but this would be subject to the same Bosphorus marine traffic congestion issue.

A gas doubling of the BTC is now under construction which will create the “Southern Gas Corridor”: giving new gas supply for Europe (Baku-Turkey-Greece-Albania-Italy). This will provide a gas Superhighway for gas from different sources, not only the Republic of Azerbaijan, but also Central Asia, Iraq, East Mediterranean on the basis of reaching additional markets in Europe & Balkans.

Other perspectives
The Turkish perspective (exemplified by the fact that the speaker had been banned from attending as a result of recent events) was given by the well known expert oil & gas journalist, John Roberts, who noted the departure of 300 senior staff of Turkish Ministry of Energy and spoke of the consequences for gas export projects from the Caspian region.

New energy diplomacy= energy cooperation
Add to this the recent differences of view between Baku and Athens as well as Baku and Tbilisi and the ground was well prepared for me to suggest that the time is ripe for a new energy diplomacy initiative as proposed by Iran Petroleum Minister. Possible initiatives in this field have been proposed by scholars such as Chris Cook a senior research fellow at University College London as the Energy Co-operation.

Costs are neutral
While Ambassador Mann shared the IOC/SOCAR perspective in relation to development strategy he said that ExxonMobil currently has no plans for investment in the region.  The crucial reason – which is at the heart of the Caspian Energy Grid initiative that I presented and which attracted considerable attention - is that of costs.

While nations and great IOCs (with ExxonMobil as the greatest of all) compete ruthlessly in relation to supply and demand of oil and gas as commodities, costs are a different matter, where co-operation is not only possible but mutually profitable.  Ambassador Mann made clear that ExxonMobil had no higher priority than the reduction of Exploration & Production (E & P) costs and that for the time being the combination of low prices and high E & P costs renders the Caspian region uneconomic for ExxonMobil.

My perspective - the need for a Plan B
My introduction set out my view, shared by colleagues such as Mehdi Moslehi in London with a background of working for IOCs, and also by Chris Cook, that the oil market is at a crossroads. We believe that a very significant short term oil price fall is not only imminent but has probably already begun.  Once this fall is complete, the oil market will clear and recover in the medium term but the price will in our analysis never again remain above $50 per barrel for any length of time.

The Caspian Energy Grid (CEG) – which is focused on co-operation in pursuit of the reduction of cost (and by definition, of wasted resources) – is essentially an energy strategy which may be applied by all Caspian littoral states. Moreover, as we heard from Ambassador Mann, the very same cost-saving strategy is being applied by ExxonMobil – whose economy as I pointed out is bigger than all but 40 global nations.

When a skeptical student at the ADA University 10th Summer Energy School doubted that technology providers would participate in this way, I pointed out that the great Scottish engineer James Watt had made his fortune by supplying efficient new water pumps to tin mines in exchange for one third of coal savings. Through such 'pumping as a service' I pointed out, the more Watt improved his engine, the more profit he and the tin miners both made from their shares of the coal savings.

There are three elements to the Caspian Energy Grid (CEG) initiative – Policy, People and Pilots. Firstly, in terms of Policy, cost reduction may be described as the application of an organising principle of 'least resource cost'. The common sense economic rationale of applying this principle – as Exxon Mobil will tell you – is that the higher that resource costs are priced in dollars then the more dollar profits there are in saving resources.

For the second element of People, innovation and talent are to be found in the private and public /academic sectors alike, but historically there has been little collaboration either between the sectors or especially within the sectors. Moreover, while the public sector excels in research, it is the private sector which excels in development.  In order to address the challenge of integrating the sectors, we propose a new framework for collaboration in the emerging field of Eco Innovation between the academic/public and private/entrepreneurial sectors.

This takes the form of the Institute for Resource Resilience (IRR) which is now in an advanced stage of preparation, and unveiled in London at a seminar convened by Petro Scotland in association with UK academic /private entities on 14th July 2016. Founder IRR member institutions are currently being recruited internationally.

Finally, Pilot projects are planned and it is envisaged that these will be sited in new Energy Free Zones (EFZ) on regional & international borders – and on coastlines - where new methods of energy co-operation and Eco Innovation may be tested and developed within a neutral legal framework with a view to being rolled out throughout the region & beyond.