The beginning of a Russian-Iranian alliance Political and military events 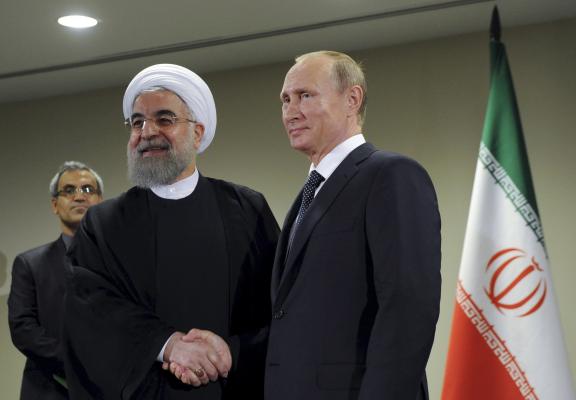 There are a number of economic and geopolitical reasons why Russia could be looking for a broader alliance with Iran, the most important of which is the desire to check U.S. influence in the world.

Russia has been bombing Syria for nearly a year now, and the intense proximity of Russian air forces to Iranian ground forces has necessarily raised many questions about the two countries’ relationship. Fighting wars together – even those as convoluted as Syria’s – is typically something that allies do, but many analysts and commentators have been reluctant to acknowledge this.

They insist that this invigorated relationship is temporary – a brief intersection of interests – and their arguments fall broadly into two categories: the historical and the realist. Neither, however, fully appreciates Russia’s desperate circumstances nor the paradigmatic shifts both countries are experiencing.

The first historical view reads that Russia and Iran were at loggerheads throughout much of the 19th and 20th centuries and this is a pattern they are destined to repeat. Even the 1828 Treaty of Turkmenchay, in which Iran ceded much of Armenia and Azerbaijan to the Russian Empire, is “still not forgotten in Tehran” and will surely put a dampener on modern relations.
An altogether more persuasive argument states that in recent history, whenever Russia or Iran has experienced closer relations with the U.S., their interest in each other depreciates substantially. Prior cooperation has certainly hinged on their respective relations with the U.S., but in both cases, these relations are going nowhere fast. Russia has ruined its relationship with the West in the long-term by annexing Crimea and occupying Eastern Ukraine.

Meanwhile the Obama administration has recently toughened its stance on Iran, partially in response to accusations of having been too soft when negotiating the nuclear deal. The two remaining candidates for the U.S. presidency have confirmed they will be tougher still, so one cannot expect a sudden flourishing rapprochement to impede Russian–Iranian relations.

Lastly, one hears that Russia and Iran are irreconcilable competitors. They vie for influence in Central Asia – particularly in the resource-rich Caspian Sea – and as owners of the world’s largest and second-largest proven natural gas reserves, they are sure to compete bitterly now that sanctions are lifted and Iran is re-entering the market. These claims, however, invite a closer inspection.

Both Russia and Iran might well aspire to regional hegemony in Central Asia, but this should not diminish the fact that each has far more at stake elsewhere. Russia’s region of choice is Europe while Iran’s is the Middle East, and each is yet to seriously challenge the other in its preferred region.

They might both be intervening in Syria, but across the Middle East, Russia seeks only customers whereas Iran seeks clients. Furthermore the potential for Iran to upset Russia’s energy trade with Europe – where it has always made most of its profit – has been drastically overstated.

Closer to home, the two powers are guided and united by a greater strategic imperative: guarding Central Asia and the Caspian Sea from U.S. influence. Both might have bolstered their Caspian naval presence in recent years, but joint military exercises such as those held in October are hardly the behavior one expects from rival powers.
Shifting paradigms in Moscow and Tehran

The fundamental mistake of these analyses is to ignore or downplay the momentous and complementary changes taking place in Russia and Iran. The latter is emerging from decades of sanctions and isolation while the former is retreating from the post-Cold War world it joined in 1991. Iran’s transition is important but Russia’s is key, for it defines their burgeoning relationship.
Russia has burned its bridges with the West by intervening in Ukraine and has found little comfort in pivoting to China, which has instead taken advantage of Russia’s weakness to secure bargain-price gas while refusing to lend even diplomatic support to Russia’s reckless foreign policy. Hence Russia seeks new strategic partners, and this has been the driving force behind improved relations with Iran.

It has pursued Iran by a series of credible, favor-winning, and largely unreciprocated acts. Despite being in the middle of prosecuting a hybrid war in Ukraine, Russia worked tirelessly to secure the Iranian nuclear deal now hailed as one of U.S. President Obama’s crowning achievements.

The deal, of course, released Iran from crippling sanctions but also warded off what was becoming a very real threat of military intervention. Furthermore it ensured that any so-called “snapback” – the re-imposition of sanctions if Iran was found to be cheating – would be difficult and would likely void the entire arrangement. Russia also volunteered its Rosatom nuclear energy corporation to handle the exchange of 8.5 tons of Iran’s low-enriched uranium stockpile (leaving just 300 kg as specified in the deal) for 140 tons of natural uranium.

While the Obama administration has notably cooled on the nuclear deal, Russia has not, for this was only the beginning of its courting of Iran. Not only has it continued to lobby for Iranian interests at the negotiating table, but it also has been working methodically to soothe every contention between itself and Iran.

The demarcation of the Caspian Sea, for example, has plagued relations between its littoral states (Russia, Iran, Azerbaijan, Turkmenistan, and Kazakhstan) since the Soviet Union collapsed. But Russia’s foreign minister, Sergey Lavrov, now expects this issue to be resolved at a summit next year after a “couple of months” of intensive work.

A particularly painful issue was Russia’s reneging on a sale to Iran of its S-300PMU-1 surface-to-air missile system in 2010 as a result of Western pressure. Iran subsequently filed a lawsuit but with the first deliveries of the system’s components arriving in Iran in April this year, the lawsuit has been “settled at the political level,” according to Russian Deputy Prime Minister Dmitry Rogozin.

Lastly comes Syria. Clearly Russia had its own reasons for intervening in Syria, but the idea that this was partly motivated by the desire to curry favor with Iran has not been explored. That Iran wanted this is beyond doubt, and it has long been alleged that Russia intervened at Iran’s behest – to be the decisive air force that neither Iran nor Syria yet possesses.
Russia’s own objectives in Syria were ambiguous at best, and it does not stretch the imagination to question the extent to which Iranian commanders guided its missions. According to defectors, Iran already controls much of the Syrian Army while its own militias, including the National Defence Force and Hezbollah, have led recent military offensives and been the primary beneficiaries of Russia’s strikes. Hezbollah has even boasted about providing intelligence to support Russian sorties.
What Russia wants

There are tangible economic reasons for pursuing Iran in this way. Russia hopes to maintain existing trade links in the face of stiff Western competition but also to expand trade in areas no longer restricted by sanctions, taking advantage of between $30-$100 billion of Iranian assets unfrozen by the nuclear deal.

The former objective depends largely on the willingness of Western companies to invest in Iran, and on the ability of Iran’s reformers to implement their pro-Western agenda. The latter is more certain, and in the areas of nuclear power and defense, Russia is reaping the benefits of new Iranian capital.

Rosatom has vowed to build two further nuclear power plants in Bushehr, the site of an existing Russian-built plant, and to redesign Iran’s Fordow uranium enrichment plant in accordance with the nuclear deal. The sale of the S-300PMU-1 surface-to-air missile systems will net $800 million alone, and Iran hopes to spend a further $8 billion on Russian military equipment, including Mi-8 and Mi-17 helicopters, coastal defense systems and an advanced multi-role jet, the Su-30SM. While neither of these industries is as important to the Russian economy as energy, such deals will provide some relief amongst otherwise dismal circumstances.

More than anything, however, Russia hopes it is winning the battle for Iran’s political future, and that it will become a forceful member of the anti-Western coalition Russia has been assembling for years. Unlike many of its existing members such as China, India, and other rising powers – the burgeoning malcontents of U.S. unipolarity – Iran truly shares Russia’s anti-Western agenda as well as its rare willingness to enact this by force.

This might mean Iranian membership of the Shanghai Co-operation Organization (SCO), which is now being seriously discussed, as well as agreements with the Eurasian Economic Union, Russia’s post-Soviet answer to the European Union. But even if these do not come to pass it will mean presenting an increasingly united front, spanning from Europe to Asia, with the primary aim of checking U.S. influence in the world. This has long been Russia’s goal, and in Iran it has found a powerful and willing ally.

The opinion of the author may not necessarily reflect the position of Russia Direct or its staff.

IIKSS - The Azerbaijan-Kyrgyzstan cooperation in transit transportation has good prospects and it can be beneficial to both ...