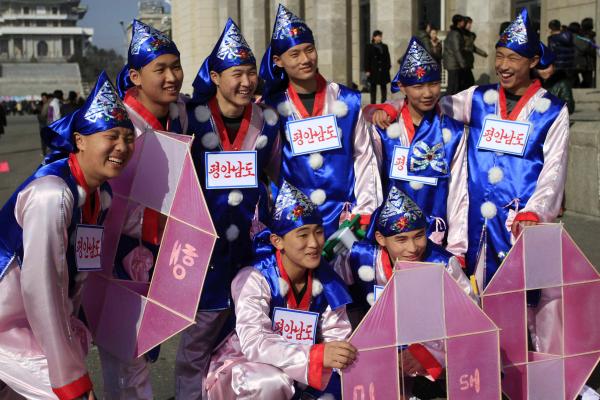 Koreans are a people of northeastern Asia. Most Koreans today live on the Korean peninsula: largely in South Korea and, to a considerably lesser extent, North Korea. Evidence sugguests that most of their ancestors once lived in Manchuria and Siberia and were Tungusic and Altaic peoples. The Koguryo people who formed the kingdom of Koguryo spoke an Altaic language; their kingdom included lands in central and northern Korea as well as Manchuria.

Hangeul is the modern Korean alphabet, with 24 letters.

In terms of mtDNA (maternal DNA), the haplogroup D4 is very common among Koreans.

Studies such as "Gene Flow between the Korean Peninsula and Its Neighboring Countries" (2010) were unable to collect DNA samples from North Koreans due to the ongoing political conflict between North and South Korea, but researchers hope to collect North Korean data in the future.

Koreans are racially a purely Mongoloid population. They carry the 1540C allele on their EDAR gene which among other things results in thicker hair than other races. Koreans also have the ABCC11 gene nearly universally so they have dry earwax as opposed to the wet earwax of most people in Europe, the Middle East, and Africa.
Major studies of Koreans

Jongsun Jung, Hoyoung Kang, Yoon Shin Cho, Ji Hee Oh, Min Hyung Ryu, Hye Won Chung, Jeong-Sun Seo, Jong-Eun Lee, Bermseok Oh, Jong Bhak, and Hyung-Lae Kim. "Gene Flow between the Korean Peninsula and Its Neighboring Countries." PLoS ONE 5(7) (July 29, 2010): e11855. Koreans living in 10 cities in South Korea were included in this study and compared with other Asian populations (Chinese, Japanese, Mongolians, Vietnamese, Cambodians) as well as peoples from Europe, Africa, and the Americas using autosomal DNA. Many Koreans clustered with Japanese people and with Chinese from Beijing and Jilin, but other Koreans (primarily from the Gyeongsang regions) formed a separate cluster that probably represents Siberian admixture. Koreans have a lot more Altaic admixture than Japanese from Japan and Han Chinese from Beijing do. Koreans living on the southwestern tip of Jeju Island have the least amount of Altaic ancestry of all Koreans in South Korea.

Excerpts from the Abstract:

"[...] By extension, the analysis of monomorphic markers implied that nine out of ten historical regions in South Korea, and Tokyo in Japan, showed signs of genetic drift caused by the later settlement of East Asia (South Korea, Japan and China), while Gyeongju in South East Korea showed signs of the earliest settlement in East Asia. In the genome map, the gene flow to the Korean Peninsula from its neighboring countries indicated that some genetic signals from Northern populations such as the Siberians and Mongolians still remain in the South East and West regions, while few signals remain from the early Southern lineages."

Excerpts from the Results section:

"[...] Of the ten historical regions in South Korea, some in SW Korea overlap with those of Japan, while most of the MW Korean regions are located at the center of the genome map. Similarly, in the NJ tree, nodes for SW Korea are close to those in Japan, MW Korea is close to China, and SE Korea is located at the right hand side of the tree. [...] the Middle West area formed a melting pot in the Korean Peninsula because populations moving from South to North, North to South, and from Eastern China, including the SanDung peninsula, to the Middle West in Korea all came together in this region. In the genome map, the signals for MW Korea are also close to those for Peking (CHB) in China. The overall result for the Korea-Japan-China genome map indicates that some signals for Mongolia and Siberia remain in SW Korea and SE Korea, respectively, while MW Korea displays an average signal for South Korea. [...] "

Han-Jun Jin, Chris Tyler-Smith, and Wook Kim. "The Peopling of Korea Revealed by Analyses of Mitochondrial DNA and Y-Chromosomal Markers." PLoS ONE 4(1) (2009): e4210. The mtDNA haplogroup D4 is very common among Korean people. This haplogroup is also prevalent in Siberia. The study found mtDNA haplogroup A in about 10% of the Koreans tested. A is the most frequently encountered mtDNA haplogroup among the Chukchi, Inuit (Eskimo), and Na-Dene peoples as well as many New World Indian (Amerindian) populations from North America and Central America. Meanwhile, the mtDNA haplogroup B is also found in some Koreans and it's also common in China and Japan. Less common Korean mtDNA haplogroups include F, M, R, U, and Z.

An excerpt from the Background section:

"The Koreans are generally considered a northeast Asian group because of their geographical location. However, recent findings from Y chromosome studies showed that the Korean population contains lineages from both southern and northern parts of East Asia."

The "Methodology and Results" section reads:

"The Korean population surveyed here is characterized by a high frequency of [Y-DNA] haplogroup O-M175 (and its sublineages) in both groups of prostate cancer patients (84.0%) and normal controls (76.3%) (Figure 1 and Table 1). This result is consistent with previous reports, showing that most of the east Asian populations share a common genetic feature of high frequencies of haplogroup O-M175-derived chromosomes [20], [24], [25]. The distribution of Y chromosome frequencies studied here was also concordant with previous results from Korean surveys [20], [25]."

"We have analyzed eight Y-chromosomal binary markers (YAP, RPS4Y(711), M9, M175, LINE1, SRY(+465), 47z, and M95) and three Y-STR markers (DYS390, DYS391, and DYS393) in 738 males from 11 ethnic groups in east Asia in order to study the male lineage history of Korea. Haplogroup DE-YAP was found at a high frequency only in Japan but was also present at low frequencies in northeast Asia, including 2.5% in Korea, suggesting a northern origin for these chromosomes. Haplogroup C-RPS4Y(711) was present in Korea and Manchuria at moderate frequencies: higher than in populations from southeast Asia, but lower than those in the northeast, which may imply a northern Asian expansion of these lineages, perhaps from Mongolia or Siberia. The major Y-chromosomal expansions in east Asia were those of haplogroup O-M175 (and its sublineages). This haplogroup is likely to have originated in southern east Asia and subsequently expanded to all of east Asia. The moderate frequency of one sublineage in the Koreans, haplogroup O-LINE1 (12.5%), could be a result of interaction with Chinese populations. The age of another sublineage, haplogroup O-SRY(+465), and Y-STR haplotype diversity provide evidence for relatively recent male migration, originally from China, through Korea into Japan. In conclusion, the distribution pattern of Y-chromosomal haplogroups reveals the complex origin of the Koreans, resulting from genetic contributions involving the northern Asian settlement and range expansions mostly from southern-to-northern China."

Excerpts from the body of the study:

"The haplogroups carrying the M9-G mutation and additional sublineages of M9-G in Korea appear to be at an intermediate frequency (81.9%) between southeast and northeast Asian populations. This result implies that the Korean population may be influenced by both the northeast and southeast Asian populations. Even within haplogroup O, the most frequent Korean STR haplotype (23-10-13 with the markers DYS390-DYS391-DYS393, 19% of haplogroup O; Table 3) is the most frequent in the Philippines (27%), whereas the second most frequent Korean haplotype (24-10-12, 16%) is the most frequent in Manchuria (45%). [...] In this study, the Koreans appear to be most closely related overall to the Manchurians among east Asian ethnic groups (Fig. 2), although a principal components analysis of haplogroup frequencies reveals that they also cluster with populations from Yunnan and Vietnam (Fig. 3). The genetic relationship with Manchuria is consistent with the historical evidence that the Ancient Chosun, the first state-level society, was established in the region of southern Manchuria and later moved into the Pyongyang area of the northwestern Korean Peninsula. Based on archeological and anthropological data, the early Korean population possibly had a common origin in the northern regions of the Altai Mountains and Lake Baikal of southeastern Siberia (Han 1995; Choi and Rhee 2001). Recent studies of mtDNA (Kivisild et al. 2002) and the Y-chromosome (Karafet et al. 2001) have also indicated that Koreans possess lineages from both the southern and the northern haplogroup complex."

N. Saha and J. S. Tay. "Origin of the Koreans: a population genetic study." American Journal of Physical Anthropology 88:1 (May 1992): pages 27-36. This is an old study that didn't use current DNA testing techniques. Excerpts from the Abstract:

"[...] Thirteen polymorphic and 7 monomorphic blood genetic markers (serum proteins and red cell enzymes) were studied in a group of 437 Koreans. Genetic distance analyses by both cluster and principal components models were performed between Koreans and eight other populations (Koreans in China, Japanese, Han Chinese, Mongolians, Zhuangs, Malays, Javanese, and Soviet Asians) on the basis of 47 alleles controlled by 15 polymorphic loci. A more detailed analysis using 65 alleles at 19 polymorphic loci was performed on six populations. Both analyses demonstrated genetic evidence of the origin of Koreans from the central Asian Mongolians. Further, the Koreans are more closely related to the Japanese and quite distant from the Chinese. The above evidence of the origin of Koreans fits well with the ethnohistoric account of the origin of Koreans and the Korean language. The minority Koreans in China also maintained their genetic identity."

The HUGO Pan-Asian SNP Consortium. "Mapping Human Genetic Diversity in Asia." Science 326:5959 (December 11, 2009): pages 1541-1545. Koreans were found to have the least amount of Austronesian DNA compared to other East Asian peoples, even a little less than the Japanese.

"All southeastern Asian populations cluster together on the left side of the plot; with only northern Han Chinese, Korean, and Manchu populations showing closer affinities with southeastern groups than with their geographic neighbors. All other northeast Asians, as well as central Asians, south Asians, and Oceanic populations, are on the right side of the plot. [...] The very low incidence of [Y-DNA] D chromosomes in Korea and in Micronesia is likely explained by recent admixture. This is not surprising given that Korea was ruled by Japan from 1910 to 1945 and Micronesia was under Japanese control for more than three decades since 1914 until the end of World War II. The same may be true for the very few O-47z chromosomes found in Korea and Southeast Asia. [...] Haplogroup M12 is the mitochondrial counterpart of Y chromosome D lineage. This rare haplogroup was detected only in mainland Japanese, Koreans, and Tibetans, with the highest frequency and diversity in Tibet (Tanaka et al. 2004). Haplogroup O-SRY465 fits basic criteria (Karafet et al. 1999) for a Yayoi founding lineage [in Japan] because it is widespread in (and almost entirely restricted to) both Japan and Korea. Its higher Y-STR diversity in Korea [...] is consistent with the hypothesis that O-SRY465 tracks male lineages that migrated to Japan from Korea. [...] Y chromosomes that originated in Southeast Asia expanded to Korea and Japan with the spread of wet rice agriculture."

"[...] [The mitochondrial] haplogroup C [...] occurs as rarely as 1-5% in Korea, [...] It is obvious that mitochondrial genomes of Russian, Mansi and FamilyTreeDNA project individual belong to D5a3a branch harboring the entire HVS1 motif, whereas Korean mtDNA represents another D5a3 branch. In fact, this most ancestral sequence indicates that D5a3 lineages could have probably arise in eastern Asia about 16 kya, and that the other lineages, belonging to the D5a3a subgroup participated in a more recent European expansion around 2.6–3.5 kya [...]"

Iran will import gas worth $30bn from Turkmenistan over the next ten years in exchange for engineering goods and services ...

On 1 July 2016, the Council prolonged the economic sanctions targeting specific sectors of the  Russian economy until 31 January 2017. ...