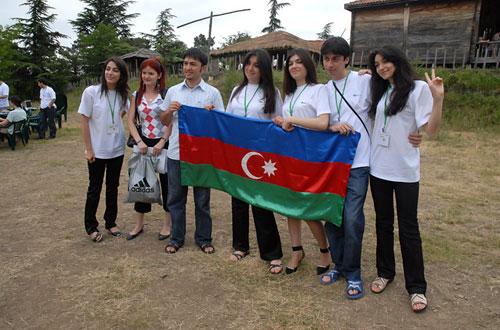 The independent country of Azerbaijan is located in the southeastern corner of the Caucasus region, and is home to many of the Azeri people. Many other Azeris live in northwestern Iran. They currently speak an Oghuz Turkic language but did not always do so (except for the small proportion of their ancestors who were Turkmens from Central Asia).

Azeris are a mixture of Caucasians, Iranians, Near Easterners, Europeans, and Turkmens, in that order of importance.

Bayazit Yunusbayev, Mait Metspalu, Ene Metspalu, Albert Valeev, Sergei Litvinov, Ruslan Valiev, Vita Akhmetova, Elena Balanovska, Oleg Balanovsky, and Shahlo Turdikulova. "The Genetic Legacy of the Expansion of Turkic-Speaking Nomads across Eurasia." PLoS Genetics 11:4 (April 21, 2015): e1005068. The dataset for this autosomal DNA study includes samples from 18 Azeris from northwestern Iran and 5 Azeris from Daghestan. The Azeris received their partial Turkic ancestry around the 9th century according to the genetic evidence and didn't subsequently receive much or any additional Turkic ancestry, since their "Central Asian ancestors crossed the Iranian plateau and became largely inaccessible to subsequent gene flow with other Turkic speakers". Their ADMIXTURE analysis, shown in Figure 2, demonstrated that the Azeris "share most of their genetic ancestry with their current geographic non-Turkic neighbors."

Roza Arambievna. "Genogeografiya tyurkoyazichnikh narodov Kavkaza: analiz izmenchivosti Y-khromosomy." Dissertation. Moscow, 2013. 125 Azerbaijani men from Azerbaijan and Daghestan were tested and compared with other peoples of the Caucasus. Azerbaijanis and Kumyks have similar genetic profiles in terms of what Y-DNA haplogroups they tend to have. They share the same 6 main Y-DNA haplogroups but possess them in different frequencies. Excerpts from the paper:

Levon Yepiskoposian, Shot Margarian, Laris Andonian, and Vahid Rashidvash. "The Location of Azaris on the Patrilineal Genetic Landscape of the Middle East (A Preliminary Report)." Iran and the Caucasus 15:1-2 (2011): pages 73-78. The Azeris are more closely related to neighboring peoples than to Central Asians. They are mostly an Iranian people who adopted a Turkic language. Abstract:

"The origin of the Turkic-speaking population of the north-western provinces of Iran, the so-called Azaris, is the subject of long-year debate. Here, we present preliminary results on testing of several hypotheses concerning their origin: 1) the Azaris are the descendants of the Turkic ethnic groups migrated from Central Asia; 2) they have an autochthonous origins; 3) they are of Iranian origin; and 4) they have mixed ethnic origin with unknown proportions of source populations' contribution. The results show that Azaris have much weaker genetic affinity with the populations from Central Asia and the Caucasus than with their immediate geographic neighbours. Relying on these outcomes one can suggest that language replacement (change) with regard to Azaris occurred through 'elite dominance' mechanism rather than 'demic diffusion' model."

"The imposition of Turkish language to this region was realized predominantly by the process of elite dominance, i.e. by the limited number of invaders who left only weak patrilineal genetic trace in modern populations of the region."

Excerpts from the middle of the study:

"[...] 14 haplogroups were found, where more than 90% of the Azeri population belonged to the I, U, K, T, J, H, HV, W and X haplogroups. The most prevalent of these was the H haplogroup (25.57%) followed by the U haplogroup (20.3%). From the European haplogroups, 8 haplogroups H, I, J, K, T, U, W, X were found in 109 Azeris (81.96%) the West Asian haplogroup, HV, was found to be present in 13 Azeris (9.77%). Three Azeris (2.26%) with the N haplogroup and 4 others with unknown haplogroups (3%) were also observed. From the 8 Asian haplogroups (A-G, M), the A, M and D haplogroups were found in 3 Azeris (2.26%) and the African haplogroup (L) was observed in one Azeri subject (0.75%) (Table 2). [...] In this population, specific European (H, I, J, K, T, U, V, W, X), Asians (M, A, D) and African (L) haplogroups of the mtDNA have been observed, but most of this population (82%) possess the European specific haplogroups. [...] Considering the similarity between the Azeri and Iranian haplogroups (Table 3), it can be concluded that the Iranian population have been living in Azerbaijan since ancient times, and a small ethnic group who spoke the Altaic language subsequently invaded this region, as confirmed by historical documents. In the 11th century this region was invaded by 'Seljuq' Turks (Gharagheshlaghi et al., 2007) and 'Oghuz' nomadic riders (Johanson et al., 1998)."

Ivan Nasidze, Tamara Sarkisian, Azer Kerimov, and Mark Stoneking. "Testing hypotheses of language replacement in the Caucasus: evidence from the Y-chromosome." Human Genetics 112 (2003): pages 255-261. This study showed that some Azeris of Azerbaijan are closely related to Armenians and Kurds, and not very related to other Turkic-speaking peoples. This is because Azeris descend primarily from an indigenous people that adopted the Turkic language later on. Abstract:

"A previous analysis of mtDNA variation in the Caucasus found that Indo-European-speaking Armenians and Turkic-speaking Azerbaijanians were more closely related genetically to other Caucasus populations (who speak Caucasian languages) than to other Indo-European or Turkic groups, respectively. Armenian and Azerbaijanian therefore represent language replacements, possibly via elite dominance involving primarily male migrants, in which case genetic relationships of Armenians and Azerbaijanians based on the Y-chromosome should more closely reflect their linguistic relationships. We therefore analyzed 11 bi-allelic Y-chromosome markers in 389 males from eight populations, representing all major linguistic groups in the Caucasus. As with the mtDNA study, based on the Y-chromosome Armenians and Azerbaijanians are more closely-related genetically to their geographic neighbors in the Caucasus than to their linguistic neighbors elsewhere. However, whereas the mtDNA results show that Caucasian groups are more closely related genetically to European than to Near Eastern groups, by contrast the Y-chromosome shows a closer genetic relationship with the Near East than with Europe."

"The expanding waves of Altaic-speaking nomads involved not only eastern Central Asia [...] but also regions farther west, like Iran, Iraq, Anatolia, and the Caucasus, as well as Europe, which was reached by both the Huns and the Mongols. In these western regions, however, the genetic contribution is low or undetectable (Wells et al. 2001), even though the power of these invaders was sometimes strong enough to impose a language replacement, as in Turkey and Azerbaijan (Cavalli-Sforza et al. 1994)."

Research conducted by Maziar Ashrafian Bonab, et al. of the Department of Genetics at University of Cambridge showed that Azeris living in Iran are connected to the Persian (Iranian) people of Iran in terms of their FST (fixation index) value, their MRCA (most recent common ancestor), and their mtDNA genetic types, and that Azeris are distant from Anatolian Turks and European Turks.

Viola Grugni, Vincenza Battaglia, Baharak Hooshiar Kashani, Silvia Parolo, Nadia Al-Zahery, Alessandro Achilli, Anna Olivieri, Francesca Gandini, Massoud Houshmand, Mohammad Hossein Sanati, Antonio Torroni, and Ornella Semino. "Ancient Migratory Events in the Middle East: New Clues from the Y-Chromosome Variation of Modern Iranians." PLoS ONE 7(7) (July 18, 2012): e41252. 938 males from 15 ethnic groups living in Iran had their Y-chromosomes tested. 63 Azeris from the Azerbaijan Gharbi region of northwestern Iran were among the test subjects. The study suggests "The Azari people likely derive from ancient Iranic tribes, such as the Medians in Iranian Azerbaijan. [...] Today, the Azari language is completely replaced by Turkish or Azeri language. The question remains whether this language replacement happened with Turkish people gene flow or it happened simply as a result of acculturation without gene flow." The study presents the Azeris' Y-DNA data in Figure 1, "Frequencies of the main Y-chromosome haplogroups in the whole Iranian population (inset pie)", where it is shown that G-M201, J2-M410, Q-M242, R1-M269, R1-M198, and T-M70, are some of the haplogroups encountered among the Azeris of Iran. The exact percentages of their presence are listed on "Table 1. Haplogroup frequencies (%) in the examined Iranian groups."

"The genetic relationship between Kurds and Azeris of Iran was investigated based on human leukocyte antigen (HLA) class II profiles. HLA typing was performed [...] in 100 Kurds and 100 Azeris. DRB1*1103/04, DQA1*0501 and DQB1*0301 were the most common alleles and DRB1*1103/04-DQA1*0501-DQB1*0301 was the most frequent haplotype in both populations. No significant difference was observed in HLA class II allele distribution between these populations except for DQB1*0503 which showed a higher frequency in Kurds. Neighbor-joining tree based on Nei's genetic distances and correspondence analysis according to DRB1, DQA1 and DQB1 allele frequencies showed a strong genetic tie between Kurds and Azeris of Iran. The results of amova revealed no significant difference between these populations and other major ethnic groups of Iran. No close genetic relationship was observed between Azeris of Iran and the people of Turkey or Central Asians. According to the current results, present-day Kurds and Azeris of Iran seem to belong to a common genetic pool."

Azerbaijani President Ilham Aliyev sent a congratulatory letter to his US counterpart Barack Obama. “On behalf of the people of ...