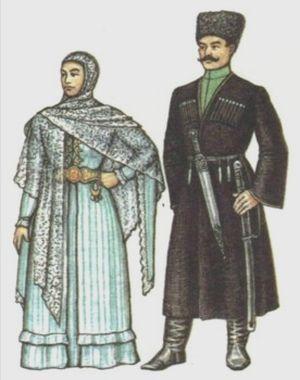 The Kumyks (also spelled Kumuks or Kumukhs) call themselves qumuqlar. Their language is part of the Kipchak branch of the Turkic linguistic family and has been written with several scripts. Some Kumyks inhabit the northeastern Caucasus on the Kumyk plateau in northern Daghestan and in the southern Terek region. Other Kumyks live in areas bordering the Caspian Sea. In the 16th-18th centuries the Kumyks had their own independent kingdom, but today they're part of the Russian Federation.

For a long time, scholars have speculated that the Kumyks may have some Khazar ancestry. Genetic studies appear to show that, regardless of what their ancestral ethnicities turn out to be, they cannot be seen as simply transplanted Khazars.

Bayazit Yunusbayev, et al. report in their article "The Genetic Legacy of the Expansion of Turkic-Speaking Nomads across Eurasia" how Kumyks received their Turkic-related South Siberian/Mongolian ancestral component from admixture around the 15th century. This is much later than the Khazar Empire's existence and speaks against them having much if any Khazar ancestry.
Major studies of Kumyks

Roza Arambievna. "Genogeografiya tyurkoyazichnikh narodov Kavkaza: analiz izmenchivosti Y-khromosomy." Dissertation. Moscow, 2013. 70 Kumyks from Daghestan were among the 870 men tested. Kumyks genetically cluster with Azeris. J1-M267 is the most common Y-DNA haplogroup among Kumyks. They have much less frequency of R1a1a-M198 than Karachays, Balkars, and Kara Nogays. They lack N1-LLY22, an Asian haplogroup that's commonplace among the Kara Nogays who live north of them. Excerpts from the paper:

Bayazit Yunusbayev, Mait Metspalu, Mari Järve, Ildus A. Kutuev, Siiri Rootsi, Ene Metspalu, Doron M. Behar, Kärt Varendi, Hovhannes Sahakyan, Rita Khusainova, Levon Yepiskoposyan, Elza K. Khusnutdinova, Peter A. Underhill, Toomas Kivisild, and Richard Villems. "The Caucasus as an asymmetric semipermeable barrier to ancient human migrations." Molecular Biology and Evolution For future print publication. First published online on September 13, 2011. 73 Kumyk men were studied for their Y-DNA; 2 of them men belonged to the Y-DNA haplogroup E1b1b1a, 10 to G2a, 14 to J1*, 2 to J1e*, 7 to J2a*, 6 to J2a2*, 2 to J2b*, 1 to T, 1 to O, 10 to R1a1*, 1 to R1a1f, 15 to R1b1b2, and 2 to R2. I presume the mtDNA of their Kumyk subjects was also studied. R1b haplogroups are very frequently encountered among the peoples of the Caucasus.

Excerpts from the Abstract:

"Multidimensional scaling analyses among West Eurasian populations revealed that mountain inhabitants of Dagestan are closely related to Anatolian and Cyprus Turks. Thus our frequency data are consistent with the available Y-chromosome data, according to which the Middle East and the Caucasus share a considerable portion of the gene pool. Overall, our results corroborate the initially suggested genetic contribution of Middle Eastern populations to Caucasus populations."

The study noted that "there is still no common consent on the origin of Kumyks". Here's an excerpt from the Results section:

"The origin of Kumyks as a distinct ethnic group in Dagestan is the subject of some debate, but two main views are extant; these views can be summarized as the migration and endogenous hypotheses (Osmanov 2002). The migration hypothesis suggests that Kumyks are derived from Turkic-speaking tribes who migrated into Dagestan from somewhere else. The endogenous hypothesis suggests that Kumyks descended from the original population of Dagestan that, later on, adopted the Turkic language along with some cultural traditions (Gadjiev 1972; Osmanov 2002). Kumyks do not cluster with other populations of Dagestan in Figure 2, but they still fall closer to European populations than to Asians. Thus, based on our Alu data, neither of these two hypotheses can be supported."

"The reconstructed Azerbaijani Jewish J2b founder phylogeny is shown in Figure 2a. The Jewish Tat population showed identical findings as those observed among in its Israeli sister community as evidenced by the fact that the same J2b1 lineage was found in 12 out of the 23 Jewish Tats mtDNA genomes. The same mtDNA lineage was also found in one out of 111 Kumyk samples."