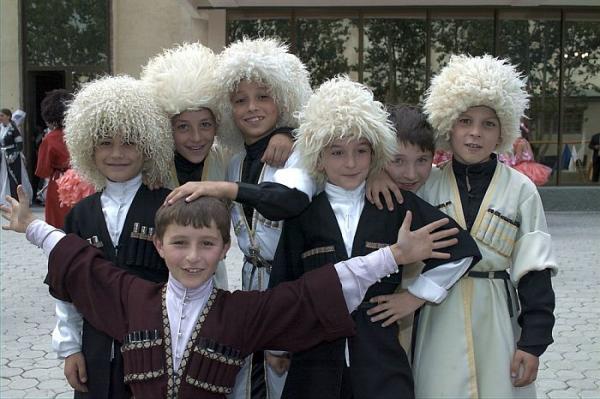 The Ossetians are a people of the central Caucasus who speak an Iranian/Iranic language called Ossetian. The primary dialects of Ossetian are Iron and Digor. In the present day, their homeland is divided into North Ossetia (part of the Russian Federation) and South Ossetia. The Ossetians probably descend in part from the medieval Alan (As) people. Under the influence of the Khazars, with whom the Alans were in alliance at one time, some of the Alans converted to Judaism.

A genetic admixture analysis by "Dienekes Pontikos" using ALDER suggests that North Ossetians have a small amount of East Asian ancestry that arrived in their gene pool about around the 1000s or 1100s, probably from Turkic-speaking nomads who immigrated to the area - perhaps from Kipchaks or Khazars.

Ivan Nasidze, D. Quinque, I. Dupanloup, S. Rychkov, O. Naumova, O. Zhukova, and Mark Stoneking. "Genetic evidence concerning the origins of South and North Ossetians." Annals of Human Genetics (November 2004) 68 (Part 6): pages 588-599. (mirror) As the article's title indicates, they used data from both South Ossetians and North Ossetians. They studied the mtDNA and Y-DNA of 70 people from 3 previously unstudied North Ossetian populations and combined that data with previously published data about other North Ossetian and South Ossetian populations. (The previously published data came from the articles "Deep common ancestry of Indian and western-Eurasian mitochondrial DNA lineages", "Haplotypes from the Caucasus, Turkey and Iran for nine Y-STR loci", "Mitochondrial DNA and Y-Chromosome Variation in the Caucasus", and "The Eurasian heartland: a continental perspective on Y-chromosome diversity".)

Exceprts from the "Discussion" section:

"The results are somewhat different for mtDNA vs. the Y-chromosome. North and South Ossetians do cluster somewhat in the MDS plot based on mtDNA (Fig. 2A), which may indicate a common origin. However, for the Y-chromosome, North Ossetians are more similar to other North Caucasian populations, and South Ossetians to other South Caucasian populations, than to each other. The SAMOVA analysis also identifies a boundary between South Ossetians and other groups for the Y chromosome, but not for mtDNA. Thus, there is no indication in the Y-chromosome of a particularly close genetic relationship between N. Ossetians and S. Ossetians. If they did have a common origin in the past, it has apparently become obscured by subsequent gene flow with their geographic neighbours on the same sides of the Caucasus Mountains. [...] Subsequent and largely male-mediated migrations between Ossetians and neighbouring groups in the North and South Caucasus, respectively, would explain the greater similarity between Ossetians and Caucasians for the Y-chromosome, as discussed previously. In conclusion, the genetic results are supported by the archaeological record, in that they reflect a common Iranian origin of South and North Ossetians, as well as a genetic footprint of ancient migrations in the North Caucasus that mostly involved male individuals."

Excerpts from the text:

Ivan Nasidze, Hiltrud Schädlich, and Mark Stoneking. "Haplotypes from the Caucasus, Turkey and Iran for nine Y-STR loci." Forensic Science International 137 (2003): pages 85-93. The Y-DNA of many North Caucasus populations was sampled and analyzed for haplotype diversity, including that of 31 North Ossetians from Digora and 27 North Ossetians from Ardon. 22 different Y-DNA haplotypes were found among those from Digora and 17 from those from Ardon. No South Ossetians were sampled for this study.

"Although Ossetian is a language closely related to Scytho-Sarmatian [...], speakers of this language have a very high frequency of [Y-DNA haplogroup] G2, not R1a. [...] Thus, the languages spoken by present-day Ossetians and Adygheans, who genetically descend from the glacialtime population (patrilineage G2) of the Caucasus, have probably been adopted from paternally unrelated populations of the Eastern Europe and the Middle East, respectively."