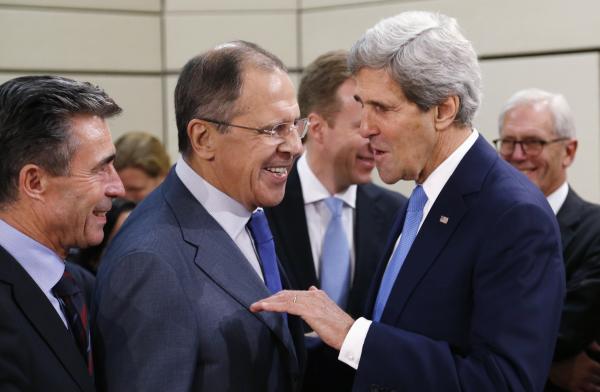 In Moscow on Friday, Secretary of State John Kerry and Foreign Minister Sergey V. Lavrov of Russia laid bunches of flowers in memory of the victims of the truck attack in Nice, France, then spent hours debating proposals for new cooperation in Syria.

But the discussions, aimed at fighting terrorism and restarting political talks to end the war, took place against a backdrop of new carnage in Syria, where a very different dynamic is playing out.

Pro-government forces are tightening a new siege around the country’s largest city, Aleppo, amid intense bombing. Farther south, they are on the verge of overrunning the long-besieged Damascus suburb of Daraya, one of the first to rebel against the government of President Bashar al-Assad five years ago. They have stepped up airstrikes, hitting marketplaces and tent camps, as civilians trapped behind blockades continue to die for lack of food and medical care.

Both supporters and opponents of Mr. Assad say he and his allies are seeking to press their military campaign as far as it can go before January, when a new American president might take a tougher line in Syria.

Even as the Syrian government periodically issues declarations of temporary cease-fires, that policy is playing out with devastating effect on the ground in Syria.

The siege that people on the rebel-held side of Aleppo have dreaded for years seems to have arrived this week, adding to besieged areas across the country where aid groups say one million people are already trapped. The only road connecting the city to the border with Turkey and rebel-held countryside has long been subject to airstrikes. But after recent advances, government forces can now rake it with artillery and machine-gun fire.

The United Nations and international aid groups are raising alarms, saying that food, medicine and medical personnel are unable to reach the city.

“We need to be able to reach eastern Aleppo,” Jan Egeland, the United Nations humanitarian adviser to the special envoy on Syria, said in Geneva on Friday, estimating that about 250,000 people still live there. “It is on the verge of becoming yet another besieged location — our largest.”

The fear in Aleppo is that the government will surround it and starve and shell it until it surrenders, as it did with Homs, a smaller city, where a siege of the downtown lasted more than two years and left virtually every building damaged. But Aleppo is far larger, and such a siege would be longer and bloodier.
Abdul Ghani Shoubak, a lawyer and member of the local council who made it into the city last week from Turkey, is now not sure when he will be able to make it out. Signs of siege are already evident, he said.

“Sugar and eggs disappeared from the market, and it is hard to find cooking gas,” Mr. Shoubak, 30, said in a telephone interview. He said that the council was trying to ration food for the public, but that the biggest problem was the inability to evacuate the wounded.

“We counted 150 air raids and 450 barrel bombs in the past two days,” he said, speaking of the primitive bombs, filled with nails and other shrapnel, that the Syrian government uses.

Rebels also increased their shelling of the government-held side and, as usual, civilians bore the brunt of it. Scores of people died on each side throughout the week.

There have been more than 300 attacks on medical facilities during the war, according to the advocacy group Physicians for Human Rights. The vast majority were carried out by the government or its allies, and Aleppo has been one of the hardest hit areas.

There are just a few dozen doctors left for a population of 300,000, said Dr. Hatem Abu Yazan, who works for the city’s only pediatric hospital, the Children’s Hospital of Aleppo, which endured an airstrike several months ago that killed several of his colleagues.

“This tells us that they are trying to displace people, forcing them to leave the city,” Mr. Yazan said in a phone interview. “They have no problem in targeting anything.”

Daraya, a suburb of Damascus, the capital, has held out for so long that residents find it hard to believe that government tanks are suddenly threatening to split the town. It lies just south of Damascus, close to major roads and military installations, and is a high-stakes symbol for both the government and its opponents.

Rebels there are running out of arms and ammunition as the government, backed by Russia, Iran and the Lebanese militant group Hezbollah, has slowly retaken supply routes.

Daraya was one of the first towns to revolt, first with peaceful protests, where residents such as Ghiath Mattar, who would hand roses to soldiers and police officers, inspired imitators around the country before he was detained and tortured to death. Later, Daraya was one of the first of the working-class suburbs around Damascus to take up arms, and to be attacked with artillery and helicopters. In a 2012 massacre, numerous witnesses reported at the time, hundreds were killed with knives by government militias.
Just a few thousand people are left in Daraya now, and they have been besieged so long that they remain a kind of time capsule of the original 2011 revolt; the rebels controlling the town are local residents, not led by foreign jihadists, and the leaders of the local council took part in early protests.

That is why Muhammad Shihadeh, a member of the local council, fears retaliation if government troops take the town: The government, he said, wants to eliminate any alternative model.

“Daraya joined the peaceful revolution, and exported peaceful activists,” Mr. Shihadeh said. “It had a well-organized local council, and this all gave Daraya a value that made it a target for the regime. If the regime manages to enter this area, we are expecting massacres against the civilians.”

Daraya went without any United Nations aid until June, when a single delivery took place, providing what was supposed to be a month’s supply for 4,000 people, but Mr. Shihadeh said there were twice that many civilians in need. Even the smuggling routes that had enabled the delivery of exorbitantly priced food have been cut off, he said; people are surviving on rice, lentils and greens they grow on rooftops and in empty lots. Residents say they are getting hungrier as rebels have lost agricultural areas on the outskirts.

“People use whatever expired medicine they find in destroyed houses,” Mr. Shihadeh said. “Most people have one meal a day.”

Daraya got a brief respite from the bombing for a few weeks beginning in March, under a cease-fire brokered by the United States and Russia, but in recent weeks it has been bombarded daily. Residents are asking for a renewal of the truce and airdrops of food if the government continues to deny permission for convoys.

Aleppo and Daraya are just two highly symbolic areas facing new stresses, but similar scenes are unfolding around the country, raising questions about whether Russia has the will or the ability to press the Syrian government to stop targeting civilians or to allow aid deliveries.

In Madaya, for instance, the town near Damascus where images of starvation galvanized international pressure for aid access this year, people are continuing to die from malnutrition after treatment kits were removed from the few convoys that went through. The last one was on April 30.

There have been 86 preventable deaths there since the siege began last year, including 65 related to malnutrition, according to Physicians for Human Rights and the Syrian American Medical Society.

“Starvation is back” in Madaya, Mr. Egeland said. “It will be a debacle for all of us if we have the same images coming out of Madaya which were there when we started our work.”

Beijing has officially opened its new train route to Iran, as the US urges its companies to wind down ...