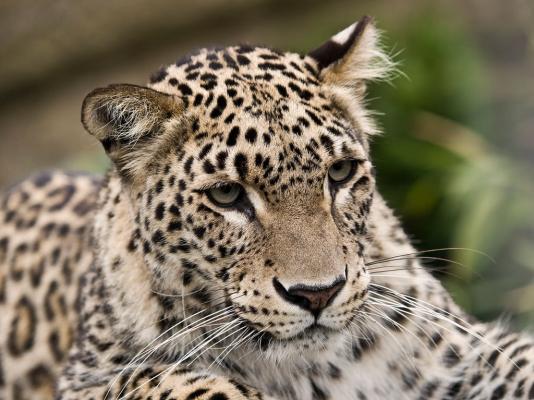 Researchers released three Persian leopards into the Russian wilderness today in the first-ever attempt to reintroduce the species into the wild. The animals are expected to become the founders of a new population of Persian leopards in Russia as part of an ambitious programme to bring the animal back to a region it once roamed in abundance.

The release of the leopards in the Caucasus Biosphere Reserve marks an important moment in the effort by WWF-Russia and its partners to reintroduce the Persian leopard in the area. The species was once common across almost all mountain areas in the Caucasus region, but populations declined drastically in the 1950s due to human activities such as hunting. There are currently less than 1,000 Persian leopards left in the wild, with the majority being found in Iran.

“The release of these Persian leopards into the wild is an important milestone in our efforts to re-establish the population, but this is only the beginning,” said Igor Chestin, CEO of WWF-Russia. “As the three leopards take their first steps into the wild, they are forging a future where the Persian leopard can thrive once again in the Western Caucasus.”

The three young leopards released – named Victoria, Akhun and Killi – were all born in a breeding centre in Sochi National Park that was built with the support of the Russian government for the reintroduction programme. Already, 14 leopard kittens have been born in the centre since its opening in 2009.

Under the programme, each of the leopards born in the centre undergoes special training for independent survival in the wild. Researchers are hoping to create a population of 50 adult Persian leopards in the region as part of a stable group that can reproduce on its own.

A series of special measures have been taken to prepare the nature reserve for the reintroduction of the leopards. Prey animals such as deer and wild boars have been steadily increased and local communities have been provided with guidelines to be observed in areas where leopards will live.

Steps have also been taken to strengthen protection in and around the territory but a new amendment that allows the construction of large-scale infrastructure in nature reserves threatens to weaken these measures. Plans to expand two Olympic ski resorts in the region could impact the survival of the newly-reintroduced Persian leopards and other species living in the area.

The Western Caucasus is not only critical habitat to the Persian leopard, it is one of the most biologically diverse areas in the country. Russia must uphold the commitments it made during its 2014 Sochi Olympics bid and ensure that protections in the UNESCO World Heritage site are not weakened for businesses and recreational interests.

“Protecting and maintaining this vibrant landscape is key to the success of the Persian leopard reintroduction programme,” added Chestin.

Following the release today, satellite collars on each of the leopards will provide information on their whereabouts as they adapt to life in the wild. Twenty-four camera traps have also been installed in the reserve along with a mobile response unit placed on stand-by to locate and reach an animal in distress.

The programme for the reintroduction of the Persian leopard in the Western Caucasus is implemented by the Ministry of Natural Resources and Environment of the Russian Federation with the participation of the Sochi National Park, Caucasus (Kavkazsky) State Nature Biosphere Reserve, A.N. Severtsov Institute of Ecology and Evolution, Moscow Zoo and WWF-Russia, with support from the International Union for Conservation of Nature (IUCN) and European Association of Zoos and Aquaria (EAZA).