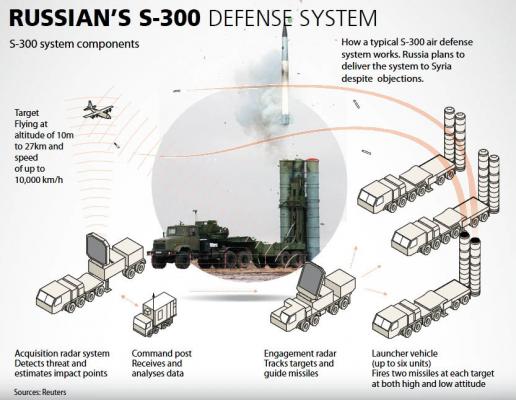 Iran has received the first batch of the S-300 air defense system, the Tasnim news agency announced on Monday.

Reportedly, Tehran has purchased the S300-PMU2 model, one of the most advanced models of the S-300 family.

Although Iran has already installed armed eyes and missile sites in upwards of 3700 point across its mainland, the S-300 system makes the country’s air space most costly for flying objects to penetrate into.

Iran paraded parts of the advanced missile battery in Tehran on April 17, ending speculation over Russians’ hesitation to ship the system to Iran.

The sale of the S-300, originally concluded in 2007, was repeatedly delayed due to the Western pressure on Russia.

In 2010, Dmitry Medvedev, then the Russian president, canceled the deal, citing UN sanctions on Iran over its nuclear program.

In addition to the UN arms embargo, the U.S. and Israel heavily lobbied Russia to block the delivery of the system to Iran, saying it could be used to shield Iran's nuclear facilities from possible future air strikes.

Angry by Moscow’s lack of commitment to the pact, Iran sued Russia in the International Court of Arbitration, asking for $950 million of compensation for the contract cancelled by Russia arms export agency Rosoboronexport.

Later in 2015 the two sides buried the hatchet as Russian President Vladimir Putin signed a decree lifting a ban on the delivery of the S-300 systems to Iran.

Since that time, there were conflicting reports as to when Iran would actually receive the system.

While it is not clear where battalions of the air defender will be installed, it seems security of sensitive locations, including nuclear sites, are a priority.

Moscow more than willing to extend nuclear partnership with Iran   Moscow intends to continue to help Tehran in ...