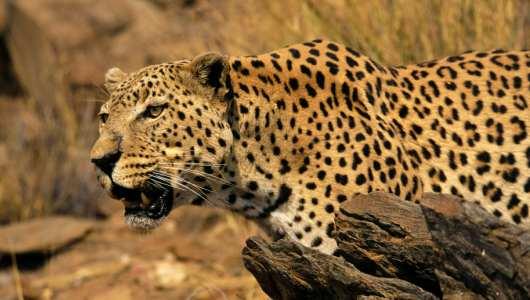 Russian conservationists released three leopards into the North Caucasus mountains on Friday, in the first ever attempt to reintroduce a big cat species to an area where it has gone extinct.

The release marks the culmination of years of work on a groundbreaking conservation programme run by the World Wildlife Fund and the Russian Academy of Sciences and backed by President Vladimir Putin.

“This is only the beginning. To create a stable self-sustaining population there must be at least 50 adult animals in the region. This is the goal our programme aims to achieve,” said Igor Chestin, head of the Russian branch of WWF.

Two males and one female were released in remote mountains above the Black Sea resort of Sochi in a ceremony covered by state television on Friday afternoon.

The Russian Academy of Sciences and WWF first proposed reintroducing the leopards in 2005. The Russian environment ministry endorsed the project in 2007, and it won personal backing from Vladimir Putin in 2009.

A breeding scheme using leopards donated by Turkmenistan, Iran, and Portugal resulted in a number of young, who were raised out of sight of humans in a state-of-the-art reintroduction and rehabilitation centre designed to prepare animals for life in the wild.

Three of their offspring, a female called Victoria and two males called Akhun and Kili, were flown from the reintroduction centre to an alpine meadow 30 miles east of Sochi and released on Friday afternoon.

Persian leopards once roamed a vast area stretching from central Asia to the Black Sea, but were wiped out in Russia’s western Caucasus by the 1920s.

There are believed to be only a few hundred left in the wild, mostly in isolated populations in Turkmenistan and Iran.

Conservationists hope the new population here will eventually expand to reoccupy much of the leopards’ historical range between the Black and Caspian Seas.

The program has enjoyed high-profile support, with Mr Putin visiting the reintroduction centre in 2014 for a photo-opportunity with the animals.

However, conservationists recently warned that the programme is threatened by government-backed plans to develop ski-resorts in the area.

Mr Chestin and other conservationists say that would cut a crucial migration corridor for the leopards and their prey, potentially jeopardising the entire project.

Last month the Telegraph revealed the programme is the subject of an internal struggle within the Kremlin, with senior figures lining up to lobby for either the resort operators or the leopards.

Dmitry Kozak, the deputy prime minister responsible for Russia’s 2014 Winter Olympic legacy, has backed plans to redraw the boundaries of the Caucasus Biosphere reserve and allow ski resorts to expand inside the Sochi National Park.

Several other senior government figures, including Sergei Lavrov, the foreign minister, are understood to have privately spoken out against the development plans.

Iran, Russia resolved to up ties in post-JCPOA era: Minister

Iran, Russia resolved to up ties in post-JCPOA era: Minister   Iran and Russia are resolute in improving bilateral relations following ...