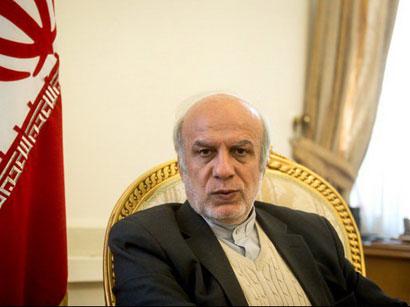 He didn’t mention any specific figure, but said that 13 percent share is “small” and that the Sea should be dissected “based on equality principle”.

Rahimpour said Iran doesn’t insist concretely on 20 percent share, “but we want the workgroup to study the legal aspects of Caspian Sea’s status and reach a common position with other neighbors.”

“Based on common formulas and sea laws, Iran’s share is 13 percent, but Iran hasn’t joined the 1982 UN Convention on the Law of the Sea (UNCLOS) and believes that the Caspian Sea is a lake and has its own conditions,” he added.

He said the dissection of the Caspian Sea based on the shape of shores doesn't meet Iran’s interests.

Rahimpour added that the Caspian countries will have a meeting or several meetings in Tehran in late August at the workgroup level, and about one month later the workgroup will hold another meeting in Ashgabat, Turkmenistan.

“Two months after that, the states will negotiate at ministerial level and the heads of states will meet in 2017,” he explained.

A meeting of foreign ministers of the Caspian littoral countries was held in Astana, Kazakhstan, July 13.

The Caspian states - Azerbaijan, Kazakhstan, Russia, Turkmenistan and Iran - signed a Framework Convention for Protection of Marine Environment of the Caspian Sea in November 2003.

Russia and Kazakhstan signed an agreement on delimitation of the northern part of the Caspian Sea in order to exercise sovereign rights for subsoil use in July 1998. The two countries signed a protocol to the agreement in May 2002.

Kazakhstan and Azerbaijan signed an agreement on the delimitation of the Caspian Sea and a protocol to it on Nov. 29, 2001 and Feb. 27, 2003, respectively.

Additionally, Kazakhstan, Azerbaijan and Russia signed an agreement on the delimitation of adjacent sections of the Caspian Sea on May 14, 2003.

Iran doesn’t agree getting only 13 share of Caspian Sea