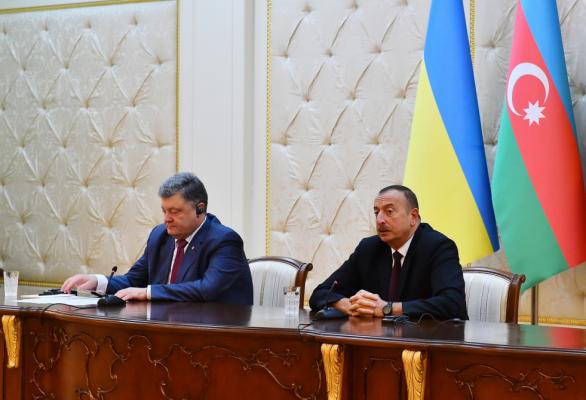 Relevant instructions have been given to revive the Odessa-Brody project, said Azerbaijani President Ilham Aliyev while making a press statement jointly with his Ukrainian counterpart Petro Poroshenko in Baku July 14.

President Aliyev said there is a great potential in economic relations between Azerbaijan and Ukraine.

“There are opportunities to expand the bilateral trade. We agreed that Azerbaijan will give consideration to Ukrainian companies while importing products,” said the president. “Azerbaijan has great export opportunities and Ukraine has a big market, and it is very interesting for us. Concrete instructions have been given.”

The president also said it is planned to implement joint investment projects.

“Relevant instructions have been given for exploring the investment opportunities in both countries, as there is a great interest in this sphere,” he added.

“As for the energy sphere, it was noted that Azerbaijan’s state oil company SOCAR has already started to actively operate in Ukraine, it has invested over $200 million and owns 60 filling stations there,” said President Aliyev. “SOCAR’s operation in Ukraine is very successful and it even more unites our countries.”

Meanwhile, relevant instructions have been given to revive the Odessa-Brody project, which was very seriously discussed at one time, he noted.

“Azerbaijan exports large volumes of oil to world markets, including to Europe,” added the president. “Meanwhile, it plays a transit role for the countries located on the eastern shore of the Caspian Sea,”

“Oil is exported to world markets from Azerbaijan’s territory and I believe there are opportunities for reviving the Odessa-Brody project. In general, I believe the cooperation in the Caspian Sea–Black Sea–Mediterranean Sea–Baltic Sea format has a great potential,” added the president.

“Undoubtedly, the operation of transportation corridors is very important here,” said President Aliyev, adding that the first test project has already been implemented and some cargoes were transported from Ukraine to Central Asia through Azerbaijan.

“Today, we agreed that in order to make this corridor more attractive from the economic point of view we should review the tariffs, because the tariffs should be reasonable for shippers, so that more cargoes are transported in both directions,” he added.

President Aliyev said he informed Poroshenko that the Baku-Tbilisi-Kars railway will be commissioned in the near future.

“This route implies the restoration of the Silk Road and new opportunities are opening up for Ukrainian companies here,” said President Aliyev. “Meanwhile, efforts are being made jointly with the partner countries to create the North-South corridor. Ukraine will be able to use this route in the future.”

“There are great opportunities in transportation and I am confident that the instructions given today will bring good results,” said the president.

“An exchange of views on creating joint industrial spheres was also held. This covers the heavy industry, and also there are great opportunities for developing the military and technical industry,” he added, pointing to the good cooperation experience in this sphere.

“These issues too were discussed,” said President Aliyev.

IIKSS - Germany-based engineering company Siemens has offered a credit facility of around $2.5 billion on the supply ...

by Paul Salopek The boulders sit on a hillside above the glittering mirror of the Caspian Sea. They are made of limestone, ...