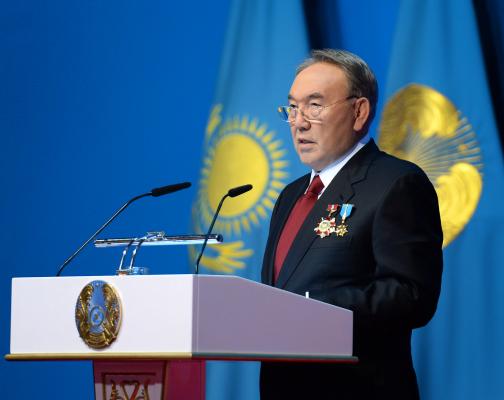 Kazakhstan is embarking on some of the most ambitious reforms in its independent history as President Nursultan Nazarbayev moves to implement his election campaign platform of five institutional reforms.

President Nazarbayev announced in his inaugural speech last May that a “Plan of the Nation” would be developed to radically change the country. The approaches, outlined in the “100 Concrete Steps to Implement Five Institutional Reforms” document, have been published to not only to give the country a clear sense of the direction in which the re-elected leader wants to take it, but also to be used as a checklist by the international community.

“We have published the 100 Steps for the world to see,” Nazarbayev said. “Now the world will be able to track our progress or lack thereof on all of them.

“One hundred concrete steps are a response to global and local challenges and, at the same time, it is a plan for the nation to join the top 30 most-developed countries in the new historical conditions. One hundred concrete steps will give Kazakhstan a margin of safety that will help the country through a difficult period, implement the Kazakhstan 2050 Strategy and strengthen Kazakh statehood. The plan lays out radical changes in society and the state, the main goal of which is treatment of systemic diseases, not just smoothing their exterior symptoms.”

Minister of Foreign Affairs of Kazakhstan Erlan Idrissov said the 100 Concrete Steps initiative was launched as a direct response to worsening regional and global conditions. Increased tensions between the major powers had led to tit-for-tat sanctions which had an impact far beyond the countries directly involved. Slowing growth across the world had seen the price of energy and raw materials fall. Europe, Kazakhstan’s biggest trading partner, remained in economic trouble, as has been underlined by the difficulties of putting in place a rescue package for Greece.

It can be tempting, Idrissov said, when faced with such unexpected storms, to put aside long-term goals and focus all efforts on getting through the crisis safely. But faced with these strong geopolitical and economic headwinds, Kazakhstan’s solution was to accelerate the country’s modernization plans.

The 100 Concrete Steps program, called Plan of the Nation, is designed to provide the strong national platform needed to overcome both short-term challenges and achieve the country’s ambition of joining the top 30 developed countries by 2050. It is a comprehensive reform package that builds on past progress to drive improvements in all the country’s institutional pillars.

Among the detailed measures are reforms to create a more effective and professional public service. Open recruitment, better training, and pay and promotion linked to performance will be introduced. Experts are to be brought in from the private sector and, where needed, from outside Kazakhstan to ensure the state sector works more effectively for citizens and the country.

Similar far-reaching reforms including the expansion of trial by jury and increased rights for defendants are being introduced to strengthen the rule of law. The entire judicial process is becoming more transparent. Judges will have to serve, for the first time, a probation period and won’t be appointed without gaining relevant experience. The involvement of distinguished judges and lawyers from abroad will again help bring up standards to international levels.

Recruitment of the police is to be overhauled and new and existing officers are to be judged against tough professional criteria. Training will be improved while the creation of local police forces accountable to communities will increase trust and responsiveness.

The program also sets out concrete steps to improve the performance of the economy by strengthening protection for investors, cutting red tape, making tax more transparent and supporting entrepreneurship. Customs and planning regulations are to be streamlined and the electricity industry and transport links modernized. The ultimate goal is to build up and strengthen the country’s middle class as the backbone of further economic and political development.

A major drive to increase exports of goods and services is being launched along with the creation, through attractive tax concessions, English system of law, and help for investors, of a new Astana International Financial Centre. Together with Kazakhstan’s full membership of the WTO which comes into force later this year, it underlines the country’s commitment to building a world-class and diversified economy.

Proposals to improve health and education provision are also central to the reforms. An overhaul of the way health services are provided and funded will see access and quality strengthened. Standards in schools including literacy are to be improved, universities given greater autonomy and, by gradually switching courses to English, increase the skills of Kazakh students while attracting more talented young people from overseas. A highly educated workforce will be needed for the long-term success of the reform program.

Across the board as well, there are radical measures to increase openness and accountability and devolve decision-making, wherever possible, to a local level. Departments and agencies will have to publish regular information so citizens can judge their performance.

The switch to services being provided electronically will be speeded up to cut delays and reduce the potential for corruption. Indeed, the determination to root out all corruption, which President Nazarbayev has identified as an important goal for the country, is a constant theme of the reforms.

Taken together, these 100 Steps mean there’s nothing short of a quiet revolution taking place in Kazakhstan, Idrissov said. Seasoned economists and observers, including Russia’s Sberbank chief German Gref who said he had experienced a “culture shock” at the depth and scope of Kazakhstan’s reform agenda, have forecast it will lead to a radically different nation. In fact, such is the scope of reforms that hundreds of legislative amendments will have to be introduced in the fall session of the Parliament. January 1, 2016 is set to usher in a stronger, more agile and modern country.

By setting a goal of becoming one of the 30 most developed countries Kazakhstan has raised its sights very high, the minister said. This detailed programme shows that, despite the current storms, the country is determined not to be blown off course.

– Creation of a modem and professional civil service

– Ensuring the rule of law

– A unified nation for the future

– Transparency and accountability of the state

Modern state for all.

9.Introduction of legislation to provide training for civil servants and professional development courses at least once every three years.

II.ENSURING THE RULE OF LAW

19.Strengthening accountability of judges. Development of a new code of ethics for judges, which can be used by citizens to appeal a specially established judicial board under the Supreme Court against judges’ actions that they consider improper.

Traffic wardens will be provided with video recorders, which will register everything that a police officer does during the shift.

41.Simplification of legalization procedure for property and money. Introducing amendments and additions to the existing legislation.

52.Implementation of new electricity tariffs to attract investments to the industry. The new tariff will cover both the financing of capital expenditure and generating costs for the power used.

62.Implementation of the “national champions” initiative with the focus on supporting leaders of medium-sized businesses in non-resource based sectors of the economy. This will provide an opportunity to create competency centres where aspiring businesspeople can learn the necessary skills.

70.Establishing the Astana International Financial Centre (AIFC), and giving it a special status consolidating legally within the constitution. Establishment of the center as a financial hub for the CIS countries, as well as the region. An independent commercial law system, which will function on English law principles and with a judicial corps consisting of foreign experts will be established. The goal is for Kazakhstan’s financial hub to join the top 20 financial centers of the world.

80.Implementation of mandatory social health insurance. Strengthening financial sustainability of the health system through the principle of mutual responsibility of the state, employers and citizens. Priority financing of the primary health care. Primary care will be the core of the national healthcare for prevention and early fight against diseases.

Introduction of annual reports on the performance of heads of national higher education institutions.

– The National Modernization Commission under the President is established. It has five working groups, which include national and foreign experts.

-The national commission should implement five institutional reforms on a step-by-step basis. It will ensure effective discussions between state agencies, the business sector and the civil society.

– The national commission should adopt conceptual decisions and define concrete action plans. Its proposals will be approved by the President of Kazakhstan. Once approved, the Parliament will transform these proposals into legislation.

– Efficiency of implementing key initiatives by Ministers and Akims will be thoroughly monitored by the national commission.

-It is necessary to establish an international consultative council with experienced foreign experts under the national commission. This council will develop recommendations and carry out independent monitoring of reforms and their implementation.

– The office of the Prime Minister of Kazakhstan will act as the working body of the national commission.

Azerbaijan to export 50,000 tons of date until end of March

Azerbaijan is one of the major producers and exporters of date. The dates are grown mainly in Goychay, Balakan, ...