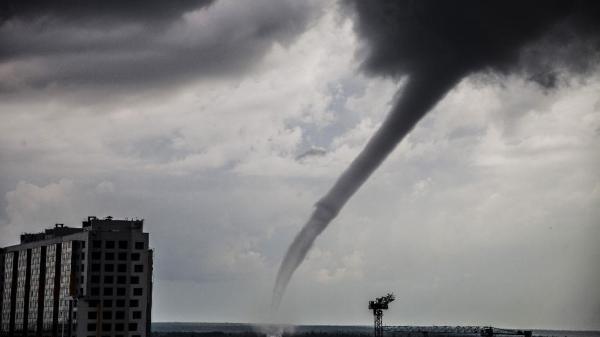 A tornado roared along the Ob River surface near Yugorsky Highway in Surgut. This phenomenon usually takes place after warm and cold airflows collide. (Sputnik via AP)

A pair of rare tornadoes touched down in southern Siberia last week, and one of them hit near Surgut, Russia.

At least one of the tornadoes passed over the Ob River on July 6 and temporarily became a waterspout before it moved onshore and caused minor damage.
Temperatures at the Surgut airport were around 73 degrees, according to the Pogoda weather service, before the heavy thunderstorms hit and cooled the air to 65 degrees. Temperatures nearby locations dropped even farther, falling 16 degrees.

Dew points before the storms hit were in the mid-60s, surprisingly warm and moist for such a landlocked area. These conditions helped spawn the severe thunderstorms.

Tornadoes are more common in western Russia than they are in Siberia, but this may be in part due to fewer people living in Siberia to report them. Russia gets four to five reported tornadoes per year on average. The tornado season last from June through August, but can vary across the country.

Most tornadoes are in the F0 and F1 range, according to the Monthly Weather Review, but tornadoes as strong as F4 have occurred. The original Fujita Scale was used in this study.
The Ural Mountains, just west of Siberia, may play a similar role in developing weather systems to the Rocky Mountains in the United States.

A possible moisture source for higher dew points may be the Caspian Sea and to a lesser extent the Aral Sea. Numerous rivers, including the Ob River, could also feed humidity into the area.

The Mejlis (Parliament) of Turkmenistan of the sixth convocation has approved and adopted the draft law "On state regulation ...

Russia, Iran to deepen ties in aviation industry    After conducting a thorough review, Russia reached a conclusion that it's ready ...