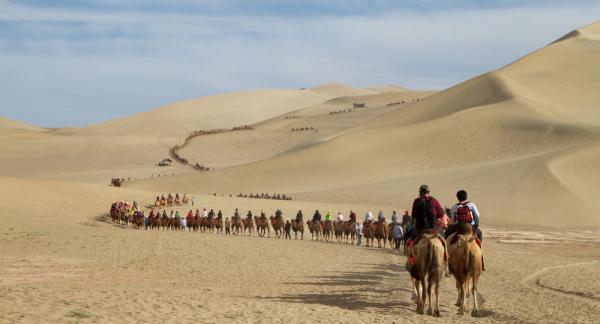 Beijing is becoming increasingly aware that although China has become an economic giant, it risks being connected with the world only through trade.
To expand its international influence, China needs new political concepts that can compete with Western ones.

“The Chinese town of Khorgas, on the border with Kazakhstan and a strategic crossroads along the new Silk Road, can’t be found on printed maps. Built from scratch over the past three years, it has quickly become a sprawling grid of broad avenues with the feel of a California town,” Bruno Maçães wrote for news website Politico.

The city is busy being lined with trees and if one is to look from the Kazakh border a nascent line of skyscrapers is visible. Most street lights are not yet operational but as the city’s facilities are being installed, the population is already around 100,000.

The Chinese see the city of Khorgas as a link between East and West and as an extension of their global economic project, the Silk Road Economic Belt, which seeks to connect China with Central Asia and Europe by means of fast transport infrastructure, trade, finance and cultural exchange.

“On the Kazakh side of the border, the atmosphere is more subdued. The Kazakh Khorgos (the two cities share a name but it is pronounced slightly differently on either side of the border) is still more or less what it has always been: a couple of dozen old houses congregated around a pretty mosque,” Maçães noted.

Despite considerable lack of development on the Kazakh side, three giant yellow cranes shine in the morning sunlight.
These cranes are working on the development of the Khorgos dry port, a project to construct one of the world’s largest ports in a place furthest away from any ocean.

“Such are the ironies of globalization.”

The area is predominantly attractive to Chinese manufacturers, who are starting to settle in Kazakhstan to avoid paying duties to enter the Russian market.

At first glance, the construction of a network of railways, highways, energy and digital infrastructure, which will connect Europe and China, is extremely useful. Today, the delivery of goods from Chinese ports to Europe requires 36 days, the new route will shorten the period to up to ten days.

“But the new Silk Road will do more than that. The project risks upsetting old geopolitical dynamics and reigniting a 19th-century world of great-power rivalry, a race for power at the heart of the greatest landmass on earth,” Maçães noted.

The Silk Road Economic Belt is one of the most ambitious infrastructure projects in Eurasia. The initiative is one of the top priorities for the Chinese government.

The project is more than just a group of new transportation corridors linking China with Europe. In fact, the New Silk Road is a new model of economic partnership in Eurasia.

The initiative includes several transit corridors from western China to Europe which can be divided into three groups – the Northern Route, Sea Route, and the Southern Route.

The Northern Route is considered the most promising among the others. It would go via Kazakhstan and Russia. The Sea Route would include transit routes via Kazakhstan as well as ports of the Caspian Sea for transit to Turkey. The Southern Route would bypass Russia via Kyrgyzstan, Uzbekistan, Turkmenistan, Iran and Pakistan with an access to the Indian Ocean.

IIKSS - Iran is going to participate in construction of renewable energy plants in Kazakhstan and the two ...