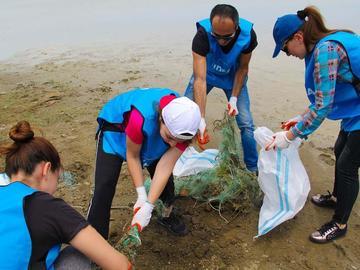 IDEA Public Union, which is aimed at promoting public awareness of environmental issues, organized another beneficial campaign in the country.

This time the public union focused on cleaning the largest river in Transcaucasia -- the Kura, which is of great importance for the economy of Azerbaijan, Azernews reports.

The action was organized in collaboration with Blue Marine Foundation, a charity dedicated to creating marine reserves and establishing sustainable models of fishing and Ministry of Ecology and Natural Resources of Azerbaijan.

The action took place in a part of the Kura river in the territory of Neftchala region. About 100 volunteers of IDEA, local youth and community representatives cleared the coast of municipal waste and unusable fishing nets.

During the campaign, the locals also have been informed of the damage caused by pollution and waste to fauna and the environment in the delta of the Kura and the Caspian Sea.

The main purpose of the action is to prevent pollution of the Kura coast, observe cleanliness in these areas, and ensure public awareness of this issue.

The Clean Kura campaign was organized within the framework of the reconstruction program of the Caspian Sea fauna. Along with the regulatory and institutional arrangements to address environmental issues, the social action and outreach are also of particular importance.

With this in mind, IDEA Public Union regularly organizes such actions on the coast of the Caspian Sea, including the Kura in order to preserve and protect, as well as increase the protection of the Caspian Sea biological resources.

The river, frequently called as “Mother Kura” in Azerbaijan, is replenished by groundwater, snow, and rain and is used for irrigation purposes. The Kura River also gives the means of producing energy to the Mingachevir, Varvara, Shamkir and Yenikend hydro power stations. Moreover, it is the only river in the country suitable for shipping.

Today, the amount of biogenic substances in the river and its tributaries exceeds the established norm by several times, as a result of the discharge of untreated water and industrial waste into the river from the territory of Armenia and Georgia.

IDEA launched by Leyla Aliyeva in 2011, is aimed at promoting public awareness of environmental issues and action, collaboration with youth, education in the field of environmental problems and finding proper solutions for them.

IDEA is all about working with young people to put environmental awareness and action at the heart of family, community and national life. The mission of the union is to create a real and virtual community of young people, regionally and internationally, with a shared passion for the environment, and practical calls for environmental actions.