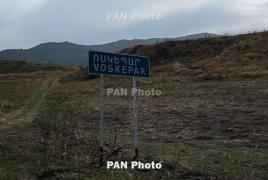 Chief of the village of Baghanis Narek Sahakyan said he didn’t hear gunshots as he was on his way to a nearby town, but he did see the patrol cars on his way back and learned about the fire then.

According to him, people had to bypass that part of the road for an hour.

Azerbaijan last shelled Baghanis on the night of June 8-9, at around midnight.

Roofs and windows of houses were damaged, village chief Narek Sahakyan said then.

“The shooting didn’t disrupt the school exams in the village,” Sahakyan said.

“The 11th-graders who were returning from a full day of touring had to wait at the forefront of the village due to security concerns.”

On the wings of Caucasian Black Grouse in Iran

On the wings of Caucasian Black Grouse in Iran   “The Birds of Iran” is an important landmark and the ...

Russian-Iranian bank may ditch the US dollar   Moscow and Tehran are actively working on opening a joint ...