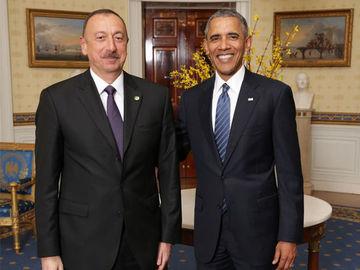 “On behalf of the people of Azerbaijan and on my own behalf, I extend my heartfelt congratulations to you and through you the people of your country on the occasion of the national holiday of the United States of America – Independence Day,” said President Aliyev in his congratulatory letter.

“Today, the relations between the Republic of Azerbaijan and the United States are developing in all areas,” the president said. “Close and mutually beneficial cooperation in a variety of fields between the two countries has raised our bilateral ties to the level of strategic partnership.”

President Aliyev said that close cooperation and mutual support in ensuring energy security of Europe, in the fight against terrorism and in NATO-led peacekeeping mission in Afghanistan are the peculiarities of Azerbaijan-US partnership.

“We also have great hopes, Mr. President, that the efforts of the United States, as a co-chair of the OSCE Minsk Group, and your personal efforts towards solving the Armenia-Azerbaijan Nagorno-Karabakh conflict caused by Armenia's territorial claims against Azerbaijan, liberating Azerbaijan’s occupied lands and ensuring the return of over a million Azerbaijani refugees and IDPs to their homelands will soon yield results,” the president said.

“On this joyful day, I wish you robust health, success in your activities, and the friendly people of the United States lasting peace and prosperity,” Ilham Aliyev said.

A House subcommittee on Thursday will debate three bill aimed at halting Boeing’s sale of passenger jets to Iran. The House ...