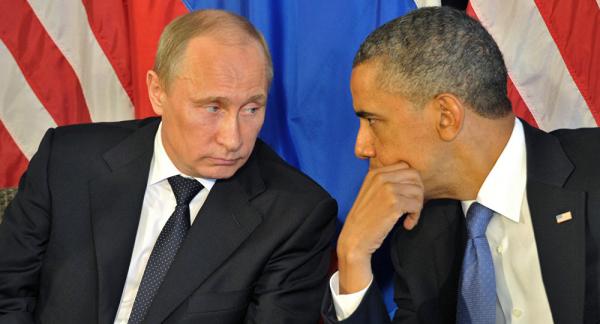 Russian President Vladimir Putin called US President Barack Obama to discuss global conflicts, including those in Nagorno-Karabakh, Syria and Ukraine.

According to official White House and Kremlin websites, the presidents had a phone conversation on July 6, during which President Putin informed President Obama about the outcome of the former's meeting with Azerbaijan and Armenian presidents Ilham Aliyev and Serzh Sargsyan. The US is a co-chairman of the Minsk OSCE group on the Nagorno-Karabakh conflict.

Obama reportedly expressed his esteem for Russia's efforts to mediate negotiations between Azerbaijan and Armenia. Putin underscored that Russia was seeking a ceasefire as soon as possible. The two leaders agreed to continue their cooperation under the Minsk OSCE group framework.

Syria was discussed, and both sides confirmed their readiness to increase military cooperation in the country, to defeat Daesh and al-Qaeda affiliate al-Nusra Front. President Putin called for moderate opposition groups to disengage from the al-Nusra and join the negotiated ceasefire.

The two leaders agreed on the importance of resurrecting the UN-led negotiation process, to achieve a peaceful resolution to the five-year civil war.

The two presidents discussed Ukraine, and both sides stressed the urgent importance of moving forward with the full implementation of the Minsk agreements. The Kremlin website elaborates that this must include a direct dialogue between the current Kiev administration, and the representative governments of Donetsk and Lugansk, granting a special status to the two latter regions and the implementation of local elections.

This was the second recent interaction between the two presidents, as on Monday Putin sent an Independence Day greeting card to Obama in which the former urged the two countries to mend ties and "act as equal partners and respect each other's legitimate interests."

Russian-Iranian bank may ditch the US dollar   Moscow and Tehran are actively working on opening a joint ...